By JACK BOWERS
October 7, 2006
Sign in to view read count 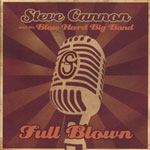 When I was a youngster, a blowhard was someone who was always making outlandish statements, usually about himself, with absolutely no proof to back them up. On its debut album, Full Blown, trumpeter Steve Cannon's Blow Hard Big Band makes some statements too, but the proof is in the playing—and the inescapable verdict is that Cannon's superlative ensemble warrants any praise, no matter how grand or immoderate.

The band is sharp and powerful, rock-steady and swinging all the way—but then, it's hard not to swing when all of one's arrangements have been written by none other than Tom Kubis, a widely acclaimed musical wunderkind whose persuasive big band charts are practically in a class by themselves. Kubis not only scored every number, he wrote four splendid originals that are among the album's highlights. Kubis even makes the old warhorse "Avalon sound fresh, as he does everything from Ellington's "Do Nothin' Till You Hear from Me, Benny Golson's "Killer Joe and Thad Jones' "A Child Is Born to Cole Porter's "You'd Be So Nice to Come Home To, a new arrangement of Sammy Cahn/Gene DePaul's "Teach Me Tonight and an irrepressible bossa, "Holiday, by Steve Cannon's brother Randy. There's one medley, which neatly blends Miles Davis' "All Blues with the standard "Willow Weep for Me. Kubis has some fun with Porter's "It's All Left [Right] with Me and another standard "Just Friends, which in his creative hands becomes "Just Platonic.

Cannon takes the lion's share of the solos (he's featured alone on "Teach Me Tonight, "A Child Is Born and Kubis's "Theme without a Movie ) but, to restate Porter's theme, that's all right with me, as he is quite good, technically and artistically, calling to mind such all-around masters as Arturo Sandoval, Jon Faddis, Rob Parton, Byron Stripling or Vince Di Martino, among others. Alto Gary Harris shines on "Avalon, as do the other soloists, who include alto Warren Rand ("Killer Joe ), tenor Renato Caranto, guitarist Jay "Bird Koder and pianist Ramsey Embrick ("Holiday ), trombonists Mic Gillette ("Booke Ends ) and Jeff Uusitalo ("Blues/Willow, "You'd Be So Nice ), Caranto again ("It's All Left ), baritone Tim Bryson ("Just Platonic, with Koder on "Do Nothin' ) and bassist Kevin Deitz ("Booke Ends ).

Based on its performance, Cannon's assertion that the band is comprised of "a group of the finest musicians available in the Pacific Northwest is not bragging, simply the truth. If there are better ones I'd love to hear them. Full Blown is consistently impressive, and has vaulted to a position at or near the top of my list of the year's outstanding big band albums.

Visit Steve Cannon on the web.

Avalon; Holiday; Teach Me Tonight; All Blues / Willow Weep for Me; Killer Joe; Booke Ends; A Child Is Born; It