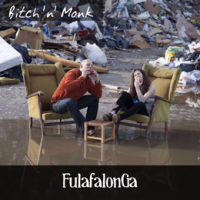 Bitch 'n' Monk is clearly willing and able to take a few risks. It's a strategy that succeeds: the duo's debut recording and self-described "short album," the beautifully-packaged FulafalonGa, lasts barely 25 minutes but packs more ideas into that brief span than most bands manage in the full 60-minutes plus of a standard CD. What's more, the ideas are exciting, surprising and strange by turns.

The titular Bitch and Monk are vocalist/guitarist Heidi Heidelberg and flautist Mauricio Velasierra. The pair also claim joint writing credits, the creative process apparently starting with free improvisations (and a few arguments) which then develop into the songs that form FulafalonGa.

The risk-taking is both visual and musical. The cover image shows the duo sitting in what can only be described as a refuse dump, on a couple of pretty disgusting chairs, eating fruit. Such disdain for health and safety regulations, the probability of nasty tummy bugs and, crucially, the likelihood of album reviewers creating hilarious jokes about the band being "rubbish," is almost heroic.

Musically, Bitch 'n' Monk take the risk of displaying works-in-progress. Five tracks are listed on the album cover, but nine actually appear: the final five are "Seminal Ideas," snippets of early incarnations and discarded drafts. It's fascinating to hear the emergence of a song such as the striking "Did He?"—"Seminal Ideas 3" is a jaunty version, with cheerful wordless vocals: "Seminal Ideas 4" has a shuffle feel, lyrics and vocal approach still not fully formed; the 36 second "Seminal Ideas 5" sounds like a nascent dancefloor re-mix.

The strength of FulafalonGa is in its first four songs—a musically and emotionally diverse set that moves from the punk aggression of "Did He?" to the bright, upbeat, delight of "Campus." Heidelberg is no virtuoso guitarist but her style—ranging from rhythmic bass note patterns plus choppy, full, chords to subtler, brighter, flourishes—is effective. Velasierra, by contrast, adapts his flute playing to suit the varying moods and attitudes of the songs with skill.

Heidelberg is a fine vocalist: aggressive one moment, tender the next. On "Did He?" she repeatedly asks "What did you do to make him leave?" in a tone that suggests she's not empathising with a friend's loss but revelling in it—attitude in spades, a Slits for the new jazz age. Soon after, on "WYW," she's a much more sympathetic protagonist combining beatboxing, soprano choral swoops and heartfelt promises to "make it worth your while" as Velasierra's punchy flute phrases fight for space with her guitar. Flute and guitar briefly seem to echo the sound of Ian Anderson and Martin Barre on Aqualung (Chrysalis, 1971)—surely making FulafalonGa the first album ever to draw comparison with both The Slits and Jethro Tull.

Bitch 'n' Monk establishes its credentials with FulafalonGa: emotionally raw, heart-on-its-sleeve, music from a duo full of ideas and the talent to see them fulfilled—inspired and inspiring.

Did He?; WYW; The Eagle; Campus; Seminal Ideas.