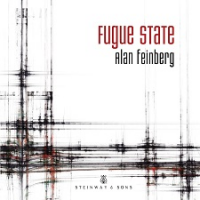 American classical pianist Alan Feinberg has made a career of cleverly conceived and produced recordings of the classical piano repertoire. He began his career with three fine Argo offerings on American themes: The American Romantic (1990); The American Virtuoso (1992); and The American Innovator (1993) focusing on Gottschalk, Beach, MacDowall, and Grainger. Feinberg has been a champion of the music of Milton Babbitt and Charles Wuorinen, having recorded many pieces by each composer.

Feinberg's previous recording, Basically Bull (Steinway & Sons, 2013) focused on the music of British Renaissance composer John Bull (1562—1628). To say that Feinberg's repertoire taste is eclectic would be to miss the point. He has shined more light on underappreciated composers than his next five contemporaries. His Taste is impeccable and his CD programming is always thoughtful and entertaining. Which brings us to the present recording Fugue State.

And, yes, there is a theme here. Feinberg riffs off of the clever title pun and performs a recital of 14 fugue compositions from the late Baroque and early Classical periods. Well represent is the fugue master himself, Johann Sebastian Bach, whose "Ricercara a 3" and "icercar a 6" from The Musical Offering open and close the disc, respectively. In between are fugues by both Scarlattis, Buxtehude, Handel, and Froberger. Feinman's playing is highly personal and uniquely original. Always an amiable performer, Feinberg makes a celebration of this old musical form, shining a 21st Century light squarely on it.