By GLENN ASTARITA
January 15, 2016
Sign in to view read count 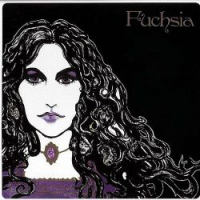 In the late 1960s and beyond, British bands such as Fairport Convention and a few others made a splash by fusing folk and rock into a cohesive whole, and in many instances caught the attention of progressive rock acolytes, due to the artists' high-level of musicianship and multifarious song-forms. Even though Fuchsia released only one album, the ensemble radiates heaps and bounds of potential, armed with the goods that could have led to a bright future if they chose to move forward. Yet from a holistic perspective and taking into account the expenses of renting a recording studio amid LP production costs and the requirements for heavy marketing support, the rigors of succeeding in the music business most always pose limiting factors. Back then, record label buy-in was a must, unlike the advent of the digital age with relatively affordable home-based gear and DIY recording processes.

The ensemble's lone album was released in 1971 and reproduced with the customary digital remastering and original artwork. And from an archival standpoint, the sound quality is quite good. Producer David Hitchcock, noted for his work with prog rock heavyweights, Caravan, Genesis and Camel did a fine job maximizing the artists' talents and sense of direction. Marked by episodic theme-building, a buoyant gait and melodic hooks, the multidimensional format is abetted by layered strings and female vocal choruses. Yet the prog rock element pervades on several tracks, as the musicians also intertwine knotty and purposeful time signatures into their repertoire.

Along with windswept dreamscapes and upbeat balladry, the folk rock foundation is augmented by Chamber-like mini-motifs and harmonious tunes, evidenced on a "A Tiny Book" and "The Nothing Song" for example, accentuated by weaving strings passages and lead vocalist Tony Durant's wistful delivery. The program is largely structured on hummable motifs, although these folks were explorers at heart and not content to dish out sappy tunes, evidenced by the sextet's broadminded approach and supple arrangements.

The musicians gel to a few mid-tempo rockers but often bend the rules by instantaneously speeding up the pulse or altering the overall flavor of a given piece. Another interesting observation is that two or three of these works could serve—still to this day —as strong cover material for other bands or artists regardless of what rock or pop related genres were involved. Hence, this is one of those rare gems that has been judiciously reincarnated for the willing consumer. Another positive is that the group's charismatic overtures and imaginative musical extrapolations still sound fresh and invigorating 45-years after the fact.

Gone with the Mouse; A Tiny Book; Another Nail; Shoes and Ships; The Nothing Song; Me and My Kite; Just Anyone.