From the Keyboard: Scarlatti, Glass, & Aho

By C. MICHAEL BAILEY
April 4, 2015
Sign in to view read count
The keyboard repertoire will never grow stale or cliche. These three composers and their interpreters will see to that. 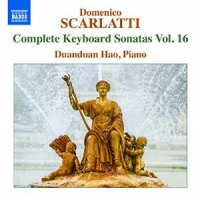 Naxos began their Scarlatti Sonata Cycle with the release of Volume 1 in 1999 with pianist Eteri Andjaparidze at the helm. Fifteen years later, the series reaches Volume 16 (with pianist Duanduan Hao) of a projected 34 volumes. All volumes have been performed on a modern piano, a trend began in the 1960s by Russian pianist Vladimir Horowitz. Naxos continues their practice of recording in spacious concert halls or churches with sonics that are both open and warm. Hao recorded his eighteen selections at Wyastone Leys Concert hall, Monmouth in November 2013.

Hao's sonata selection favors major over minor compositions fifteen to three. Scarlatti's minor-key sonatas are the dark chocolate of his repertoire, having a more Romantic character than the major-key compositions. Sonata in D minor, K. 417 had more of a fugal character than romantic, its tempo being moderate. Sonata in F minor, K. 467 is quickly paced and expansive. The Sonata in C minor, K. 362 can be placed between these two. It is introspective, but not overly so. Hao's articulation is very precise here and one can imagine Bach performing this piece. 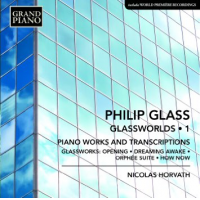 Pianist Nicolas Horvath's out-of-the-chute approach to the corpus of Philip Glass' piano music is to present the least minimalistic of Glass' compositions first. Glassworlds I promises to be a comprehensive look at the whole of Philip Glass' piano art. Horvath does begin things with Glass from his minimalist peak (a term Glass himself dislikes) in the "1. Opening" from Glassworks from 1981. Horvath takes great care in his articulation of the volume dynamics of the piece, treating the music gently were required and with muscle where appropriate. The "Orphee Suite" is made up of transcriptions (by composer Paul Barnes) of excerpts from the first opera of three in Glass' Cocteau Trilogy

The release contains one world premiere recording of "Dreaming Awake" from 2003. It was originally a benefit project that was never to be recorded By Glass himself again. Recorded some months after Glass composed "The Hours" for the soundtrack of the movie of the same name, the piece divines the deep corners of sorrow and anxiety. "How Now" from 1968 is an extended piece that orbits broken triplets that are developed slowly over the course of the composition's 30-minute duration. The piece, by the composer's warrant, requires rigorous technique and stamina and is thunderous in its presentation. It will be a treat to hear what is on Glassworlds 2. 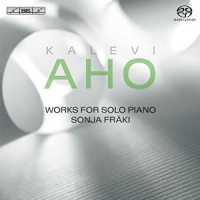 Finnish composer Kalevi Aho was born in Forssa in 1949, studying at the Sibelius Academy with Einojuhani Rautavaara and in Berlin with Boris Blacher. While Aho is better known for his larger scale works (sixteen symphonies,[2] twenty concertos, five operas) he has put together a small but striking solo piano oeuvre, all of which is considered here on a BSI release by Sonja Fraki Kalevi Aho: Works for Solo Piano. Aho's piano music is readily enjoyable. Fraki provides solid performances of his "Nineteen Preludes" and the shorter piano pieces, "Three Small Piano Pieces" (1971) and "Two Easy Piano Pieces for Children" (1973). These are all closely considered tone pieces, sound-painted vignettes.

While containing dissonance and percussive playing, Aho is also a master of melody and muscle as can be heard in the frenetic "Sonatina for Piano" (1993). "Solo II" (1985) is a mad nocturne in search of rest, while Aho's "Sonata for Piano" (1980) enjoys a classical structure that is stretched to all corners of the performance palette. Released as a Superaudio CD, Kraki's performances has a stark immediacy to them that bring the compositions very close to the listener. The effect is both stunning and a bit anxiety-inducing...like all good music should be.