Mike DiRubbo Quintet: From the Inside Out 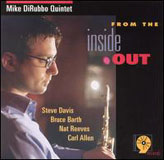 The proliferation of accomplished young saxophonists continues with New Haven native Mike DiRubbo's debut on Sharp Nine, which continues its admirable policy of promoting undiscovered but no less deserving talent. DiRubbo, now 28 years old, was only 23 when From the Inside Out was recorded in 1994. He'd already graduated from the Hartt School of Music, where he studied under alto master Jackie McLean, and was playing in the Explorer's Quintet with trombonist Steve Davis, his front'line companion here. Besides the seasoned pianist Bruce Barth, the rhythm section includes another of DiRubbo's teachers from Hartt, bassist Nat Reeves, and drummer Carl Allen, who played with Reeves in McLean's small ensemble. DiRubbo, who says his approach and phraseology are based more on the tenor saxophone than the alto (and he speaks the truth), is firmly rooted in the bop tradition, as are his compositions (four are included, the vamp to one of which, 'Blues to Your Old Country,' sounds like Duke Pearson's 'Jeannine'). There are echoes of McLean, and Parker too, in DiRubbo's keen'edged horn, as well as such tenor influences as Trane, Rollins, Shorter, Mobley and others. What emerges is an alert, expressive voice that should become bolder and more persuasive as the years go by. Davis, obviously inspired by J.J. Johnson among others, is relaxed and fluent, but content for the most part to let DiRubbo command the spotlight. Davis makes it a quintet on six of the nine tracks including his original composition, 'The Search Within.' DiRubbo and pianist Barth play a duet on the saxophonist's ballad 'For First,' which leads directly to the fleet'footed finale, Dizzy Gillespie's explicitly titled 'Bebop,' played sans Davis. Barth has another emphatic solo on that one, while the rhythm section is nimble and productive as ever. While there's nothing seismic in DiRubbo's debut, it does serve as a noteworthy preamble to what could be a long and prolific career.

Track listing: From the Inside Out; Rue de la Harpe; Role Reversal; You're a Weaver of Dreams; Blues to Your Old Country; Over the Rainbow; The Secret Within; For First; Bebop (55:23).

Title: From the Inside Out | Year Released: 1999 | Record Label: Sharp Nine Records