Sam Yahel: From Sun to Sun

By DAN MCCLENAGHAN
August 15, 2011
Sign in to view read count 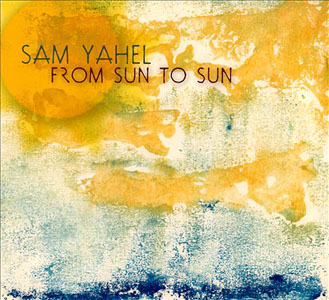 Sam Yahel made his name in jazz as an organist, notably on the excellent Truth and Beauty (Origin Records, 2009). In addition to a handful of well-received CDs under his own name, Yahel has worked his B3 Hammond magic on recordings by vocalist Norah Jones and saxophonist Joshua Redman. So it was something of a risk to return to his "original instrument," the piano, for Hometown (Posi-Tone Records, 2009), a piano trio set that opened with a nice take of John Lennon's "Jealous Guy," as well as covering Joao Gilberto's "Riversong" and Wayne Shorter's "United," and tunes by Thelonious Monk and Duke Ellington.

In that high wire act of creating a successful piano trio outing, Hometown missed: the interaction didn't quite gel; Yahel sounded a times stiff and tentative; and, with a few exceptions, not a whole lot of trio chemistry slipped into the brew. From Sun to Sun, Yahel's second attempt at the art of the piano trio is an entirely different matter—a matter of small degrees, but small degrees count on the high wire.

Yahel is joined again by his Hometown cohorts, bassist Matt Penman and drummer Jochen Rueckert. The music they've made is joyful and vibrant; the trio dynamic is so homeostatic that it breaths; and Yahel has written some of his most engaging tunes to date on a very assured set, where the players sound as if they are having the best of times.

From Sun to Sun begins with the Yahel-penned "2 Pilgrims." A jaunty bass groove opens up into a floating melody that makes some intricate tempo shifts. Yahel's touch is beautifully supple as he slips from gregarious to pensive moods, from searching dance to stealthy prowl. "After the Storm," another Yahel original, begins with waning raindrops on the piano before a cool breeze of the B3 organ breaths into the mix. Though he focuses mostly on piano, Yahel does use organ sparingly, bringing it in for more egalitarian piano/organ duets on the brief "Blink and Move On" and the title tune, avoiding the potential pitfall of having the added instrument sound tacked on or, even worse, breaking the continuity of mood the trio establishes and maintains.

The group covers Donald Kahn's "A Beautiful Friendship," and Cole Porter's "So In Love" with style and elegance, closing with an oddly angular and up-tempo take on Vernon Duke's "Taking a Chance on Love." That leaves the pianist's compositional input score at ten-to-three in his favor. Yahel has penned some real gems for From Sun to Sun—memorable and pretty tunes with depth—crafting a truly gorgeous piano trio outing with Hammond B3 seasoning.

2 Pilgrims; After the Storm; Saba; A Beautiful Friendship; One False Move; From Sun to Sun; Blink and Move On; Toy Balloon; By Hook or by Crook; Git It; Son In Love; Prelude; Taking a Chance on Love.