Soren Bebe Trio: From Out Here

By JAKOB BAEKGAARD
February 2, 2010
Sign in to view read count 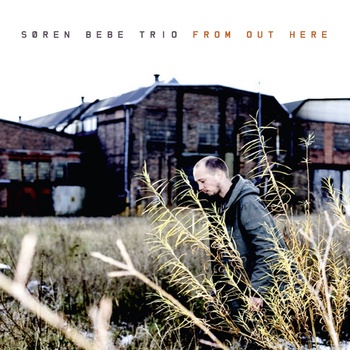 Like the derelict buildings that are placed in the background on the cover of From Out Here, Danish pianist Søren Bebe's music carries the timely imprint of a melancholy longing that arises from neglect and the sense of a void that can't be filled. But it is also imbued with sweetness and nostalgia, another aspect of historical time.

Bebe previously released Searching (Music Mecca, 2008), with bassist Niels Ryde and drummer Anders Mogensen; here the trio refines its musical vocabulary, drawing heavily from the innovations of Bill Evans and Keith Jarrett. However, in spite of the influences from these two piano icons, the trio still creates its own identity, in no small part due to Ryde—one of the few bassists in Denmark who has chosen to play the electric bass exclusively. His elastic runs on the instrument add a fluid sense of time to compositions like "Homage" and "Song For Andrea," where Bebe's bell-like playing also comes to the fore.

Throughout the album, the trio sticks to a wistful mood and Bebe shows himself as an accomplished composer with a knack for creating melodies reminiscent of lieder without words. From Out Here is a poignant offering and another fine release from the Danish independent label Your Favourite Jazz.