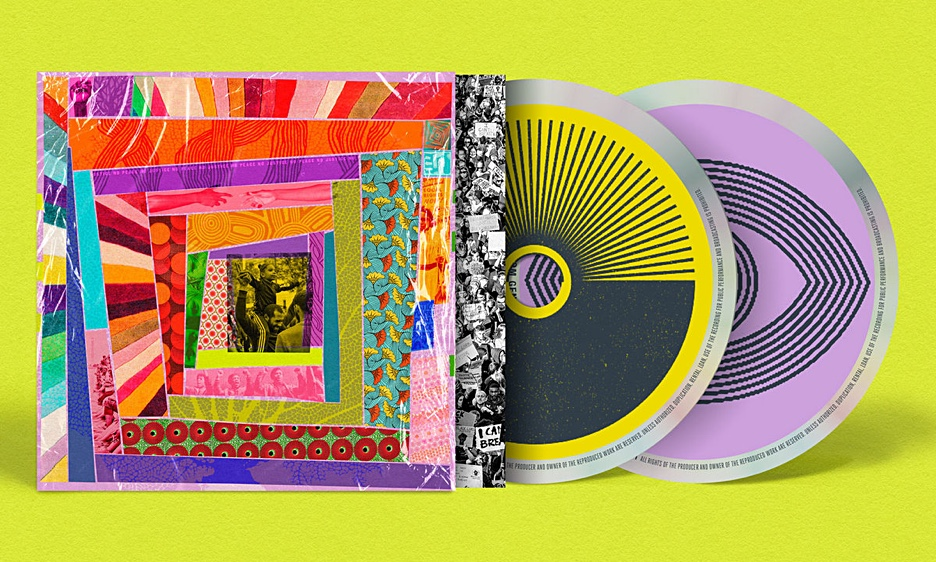 What is interesting about this project is to open the doors, not close them. We don't all have to sing, but we can just be there
—Stephany Calembert, Jammin' Colors

The release of the three-disc set The Concert for Bangladesh (Apple) in 1971 established a template for the charity benefit album that is still followed to this day: multiple discs in lavish packaging, a grab-bag of songs and most importantly, a red-carpet lineup of established, often older stars, one of whom was invariably the organizer of the project.

Stephany Calembert threw out much of that playbook for Black Lives: From Generation to Generation (Jammin' Colors, 2022). While other benefit albums may dazzle the listener with star power, this double-disc beguiles and moves the heart with a luminous unity of creativity and expressiveness. It's less a benefit album than a concept album.

In many ways, it is also a pandemic record born of the emergency funding Calembert received from the Belgian government to keep her business afloat following the cancellation of live music events. "Nobody was working. Nobody was composing," she said in a video call from her Brussels home. "It was so dark and closed that when I received that loan, I could keep the money and little by little it will be spent on different things because that's how money goes, Or I could do a beautiful human project."

Moved to action by a lifetime of witness to the effects of racism and ignited by the activism in the wake of the murder of George Floyd, Calembert, the producer and manager began with a list of 50 musicians she wanted for the project. "Some people got back [to me], others didn't," she said. "Some wanted to do it but had too much work."

Undaunted, she assembled a network of artists from the roster of her music agency and label, Jammin' Colors. Few of them are likely to be found in the big type of major jazz festival programs. Yet, she said, "All of them had something in common. It's creativity. They have something to say, and they just want to express themselves and how they feel."

It is no accident that a set conceived to bring awareness to the persistence of systemic racism begins in Africa with the buoyant "Sanga Bô" recorded in Mali by Cheick Tidiane Seck, the second-oldest artist on the set. And it's also telling that the next artist heard, rising star alto saxophonist Immanuel Wilkins, is the youngest.

Direct, often emotional expression is a through-line on the 20-song, 101-minute album; it is the rare benefit record that can—and should—be enjoyed in one listening from beginning to end. Still, the set's thoughtful sequencing scarcely hints at the fortunate accidents and longtime connections that brought its 25 composers and more than 60 musicians together.

Many of them were united by a connection to the late trumpet icon Roy Hargrove. Still others were musical associates of bassist Reggie Washington, Calembert's partner in work and life. Several had toured and recorded together. "It's like a reunion, you know," Calembert said.

Jean-Paul Bourelly, whose "Masters Of Mud" concludes the set, played with Seck as did drummer Marque Gilmore who joined his guitarist brother David Gilmore and spoken word artist Sharrif Simmons on the declarative "We Are Here." Saxophonist Jacques Schwarz-Bart worked with vocalist Stephanie McKay, pianist Grégory Privat and drummer Sonny Troupe, a fellow Guadeloupean. All have features on Black Lives: From Generation to Generation as do drummer E.J. Strickland, a Jammin' Colors artist, and his saxophonist brother Marcus Strickland. Pianist Andy Milne played in Steve Coleman's Metrics band with spoken word artist Kokayi, who joined Milne's acoustic Unison Trio for the astonishing "Togged To The Bricks." Another Metrics alumnus, Gene Lake, is represented by "Back & Forth" while his father, Oliver Lake, joined Washington and Belgian turntablist DJ Grazzhoppa's DJ Bigband + Aka Moon to read his poem "Pre-Existing Conditions." "Definitely a lot of family links," Calembert said.

Sometimes, though, artists who had not previously worked together sparked some of Black Lives: From Generation To Generation 's peak moments, like "Praying," a rapt and mysterious duet of Wilkins and Marvin Sewell's overdubbed guitars. "That was totally new," Sewell said on a video call from his New York home. "I got an email from [Calembert], a total surprise, but I was honored because that guy can play. I love his sound and his concepts." Unable to record in person in Philadelphia because of scheduling conflicts, the saxophonist and guitarist exchanged files. "He really did an amazing, amazing job on it," Sewell said.

Though all of the artists represented on Black Lives: From Generation To Generation have worked in contexts that are recognizably jazz or jazz-adjacent, the music embraces the Black experience from Africa to diasporic traditions in the Caribbean and Europe as well as in North America. The set's most conceptually audacious moment might be the collaboration between vocalist Alicia Hall Moran, Grazzhoppa and Washington, who was the catalyst that brought the two together.

Washington had been working with Hall Moran on a project using the music of the Motown label when the pandemic arrived. At the same time, he was recording in Belgium with Grazzhoppa and when Hall Moran agreed to contribute to Black Lives: From Generation To Generation, Washington sent her some of that music and asked her to write some words to sing with it but left everything else open.

"Here's what I hear in it: I hear walking. So where does walking attach to the theme of Black lives matter? That's many novels," Hall Moran said.

Or perhaps it's a libretto for an opera, the idiom for which she was so thoroughly trained. It's a training that, Hall Moran said, prepares a singer for any situation.

"You know, I don't need a composer. I know what notes I want to sing to express that. I could feel them in my body, "she said. "So the voice that I'm giving Reggie, through the tape, that's a real sonic reproduction." Freed of the visuals that distract the listener in an in-person performance, she said, "What I'm doing in my body is more honest than being there."

Where "Walk" eloquently uses the expressive possibilities afforded by modern technology, Tutu Poane's "From The Outside In," a setting of a poem by Lebogang Mashile, draws on nothing more— and nothing less—than the sound of a human voice and simple piano accompaniment.

Poane, a native of South Africa, might be the least-known artist on Black Lives: From Generation To Generation, but her contribution lands as the emotional climax of the collection as she sings Mashile's words with heartbreaking emotional directness—and deep understanding.

Like Poane, the poet is South African. "I recognize myself in so much of her work," Poane said of Mashile from Antwerp where she now lives. "Every time I would open her book, I would constantly hear music."

The poem and Poane's setting of it ends with the words, "I will wander the earth in search of my tribe or build it with the shreds of boxes with my own hands." When she repeats the final four words, you can begin to hear her breath give out. It's an illustration in sound of the struggle for dignity and recognition that embodies the theme of the collection—conveyed in the most achingly human terms.

"The subject is so complex," Calembert said. "But we all have experiences, and we all have something to share and to speak about. What is interesting about this project is to open the doors, not close them. We don't all have to sing, but we can just be there."