By CLIFFORD ALLEN
May 31, 2010
Sign in to view read count
In February 2010, Norwegian alto saxophonist and clarinetist Frode Gjerstad took the collective Circulasione Totale Orchestra to the United States for a few select performances, the first time the multinational group had been convened on American soil and a massive undertaking and feat of organization for the 62-year-old improviser. The orchestra consists of musicians from Norway, England, South Africa and the United States and grew out of a desire on Gjerstad's part, in the 1980s, to bring some of the practices and aesthetics he learned from playing with veteran improvisers like Los Angeles-based cornetist Bobby Bradford, English drummer John Stevens (1940-1994) and South African bassist Johnny Dyani (1945-1986) to young Norwegian musicians of varying persuasions.

Like a fair number of reedmen in Norway and Sweden, Gjerstad is no stranger to the multiphonic squall of tenor man Albert Ayler and sometime Scandinavian resident saxophonist Charles Tyler. It would be unfair to compare his phraseology with those two (or with German reedman Peter Brötzmann, with whom Gjerstad is often aligned), because his improvisations are much more nonlinear, a seemingly random burble of feral overblowing that, if anything, marks a parallel with the harmonic sputter of Evan Parker in the Spontaneous Music Ensemble, or the work of reedman John Tchicai.

The core of the now 13-piece ensemble consists of Gjerstad, South African drummer Louis Moholo-Moholo and English bassist Nick Stephens (also an associate of John Stevens), and while they have worked together in slightly expanded formats for nearly a decade, Quiddity is their first record as a trio.

The four pieces here are all free improvisations, ranging from 10 to 20 minutes. Moholo-Moholo is noted for his relentless circular patterns, time-heavy but open, in his own groups or those with fellow South African expats in the 1970s and 1980s. Here, his approach is more subtly woven, meandering and barely visible enclosures that map and follow Gjerstad's reeds and the pluck and scrape of Stephens' bass. But there's regularity to the soft pitter-patter on "The Nature," a whack on the snare every few revolutions keeping the trio in forward motion as Gjerstad's clarinet burbles and flits and Stephens' calluses write short, wandering poems.

A dangerous tug imbues the leader's alto opening "The Gist," shrieks and harrowing dives matching Moholo-Moholo's needling march as the bassist's oomph alternates between manhandled clusters and bowed filigree. Gjerstad's meaty, wide vibrato leaps and swaggers, buoyed by the drummer's press rolls and here-and-gone swells of action. In a sense, the music might seem sparse, but the constant and telepathic activity between Gjerstad, Stephens and Moholo-Moholo makes for an environment of concentrated tension and occasional exuberant release—as in the choppy walk emerging toward the close of "The Gist." 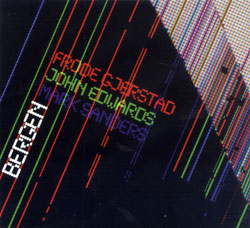 Bergen is the second disc to offer collaboration between Gjerstad and the English rhythm team of drummer Mark Sanders and bassist John Edwards, resulting in the two part (or four, depending on how the CD player reads it) "Waiting for Ryanair" suite (one can guess where that title comes from). The set was recorded at the Nattjazz Festival in Bergen, Norway in 2008.

Naturally, the presence of Sanders and Edwards offers a markedly different trio landscape from that heard on Quiddity. Gjerstad's clarinet chews and growls, spiked with piercing upper-partial cries as bass and drums saw, strum and pile in a dryly raging conflagration. A leg-shaking Dixieland stroll emerges, but in concert with fierce bull fiddling and Sanders' Tony Oxley-like staccato clang it sounds positively odd. At the close of the first 10 minutes and at the beginning of the next, Edwards' bass and bow must be smoking, for the solo he creates is a study of physicality and friction.

Gjerstad's working of the bass clarinet is an over-the-top display of jumbled, sputtering multiphonics madder than Giuseppi Logan and Michel Portal at their hairiest. Of course, having the painterly battering of Edwards and Sanders right beside probably doesn't hurt the chances of an improvisation going stratospheric in no time. The set is not all wild blowing—there are periods of rest throughout, where the three naturally catch their breath. If you're looking for admittedly off-the-charts contemporary European free improvisation, a nod in the direction of Bergen is a hell of a start. 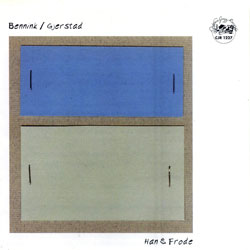 Duos with drummers are probably one of the nakedest settings to hear a reedman short of solo, breath steered by rhythmic urgency. On record, Gjerstad has more often partnered himself with orchestral small groups and has a penchant for working with bassists of vast sonic reach. Nevertheless, his duets with drummer John Stevens are among his most rewarding sets, not to mention more recent outings with Paal Nilssen-Love, Paul Hession, and Hamid Drake. Han and Frode captures the reedman in a dialogue with vaunted Dutch percussionist Han Bennink across a six-part set, recorded on the island of Inderoy, Norway as part of a Norwegian tour.

The presence of Bennink is markedly different from any of the other percussionists Gjerstad has worked with, for he's a heavy time-player in the sense that very strict swing and clear metric sense are the basis of his work, even as acrobatics and inversions sometimes subvert traditional foot-tapping. In a sense, if Gjerstad is playing with a very open net on the other two releases considered here, the net is tightly and complexly woven with Bennink at the helm. If ever the need arises to prove himself as a player aware and capable of "swing," Han and Frode might be the set to do it—Gjerstad's laid back twitter and burble takes dives and encircles as Bennink's relentless brush-on-snare groove is locked in. Of course, it doesn't take long for those brushes to dance about multi-directionally as an excited moth, Gjerstad's clarinet alternating between short vertical runs and glossolalic asides.

Maybe it's his age or perhaps merely the copacetic environment of the fjords, but Bennink's playing here seems far less combative than usual—sure, the level of play is intense and his coal-digging acerbic shuffle is in high gear, but Gjerstad knows how both to feed and counteract whatever gets thrown in his direction. Squirrely alto phrase constructions give way almost immediately to velvety purrs and Bennink is right there, ready to switch from whacking the skins off his snare to light, locomotive brush patter.

Though "free time" isn't necessarily part of the bag at this point, the incredible speed at which Bennink can work, multiplying time-riffs into networks of short, tripled-up bursts and accents in a moving and tightly-woven quilt of action. Gjerstad quavers and teases out microtonal shrieks and gurgles, stepping atop and occasionally jumping into Bennink's constant hot-coal jabs. Han and Frode presents a duet of two improvisers at the top of their game, and is certifiably one of Bennink's strongest dates in the 2000s.

Tracks: The Nature; The Gist; The Whatness; The Essence.