By EYAL HAREUVENI
November 7, 2012
Sign in to view read count 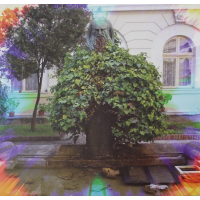 The Danish all-women Selvhenter quintet (often a quartet in live performance) may be the most exciting outfit to emerge from Scandinavia in recent years. This band, part of the art collective eget værelse and the alternative scene of Copenhagen, has alreadt been active for five years, performing with influential outfits like the Swedish-Norwegian trio The Thing and Japanese drummer Yasuhiro Yoshigaki's Orquesta libre. Selvhenter honed a sound all its own—an uncompromising, boundless energetic one that blends the aesthetics of experimental rock, the sophistication of improvised free jazz and the aggressiveness of punk, noise and metal, all performed with passion and humor, sometimes even as music fit for dancing.

The beginning of this album—a limited edition vinyl (as are all of Selvhenter's releases)— as well as the band's performances, are deceiving. It opens with a short South-Asian, Gamelan-like playful improvisation on assorted cymbals, accompanied by a contemplative saxophone, as if this band wanted to link itself with the ECM school of lyrical Nordic jazz or pay tribute to master Danish percussionist Marilyn Mazur. But then, immediately, "Æbler Og Pærer" put things in order. Polyrhythmic, thunderous, hammering by drummers Anja Jacobsen and Jaleh Negari sets the aggressive tone for spiraling, wonderfully distorted solos by saxophonist Sonja LaBianca and trombonist Maria Bertel, both using effect pedals. "Dødsjazz" ups the temperature even higher. The distorted violin, sax and trombone sound as if they are originating electric guitarist Sonny Sharrock in theie most extreme eruptions, interacting organically with the drummers who hit a hypnotic, tribal pattern.

Selvehenter's vocabulary disobeys any musical conventions or boundaries. "Solkat" is an arresting variation on the Gamelan scales, mixed with references to composer Steve Reich's urban minimalism. "Hvid Dværg" experiments with extreme and dense textures of noise. "Hajskindshabit" surrenders to the form of art rock song with repeated, infectious chorus, through a joyful storm of distortion. "Kvalme" opts for the drama of a metal suite. "Ude På Landet" has a hyperactive, super-fast and dance- like swinging rhythm mixed with weird, distorted sounds. The final track "Ruth" is in- your-face, inspired play in cacophony.