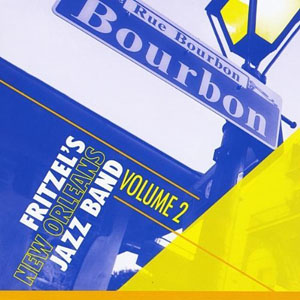 Coming off of the success of its first studio CD, Fritzel's Jazz Band delivers once again with its fifteen-song Volume Two. Fritzel's is the venerable forty year-old New Orleans jazz club, located in the 700 block of Bourbon Street that has established an international reputation for Dixieland jazz in a fun European-style bar setting. This CD includes many old chestnuts, including "Tiger Rag," "Ice Cream," "Rockin Chair" and "My Bucket Got A Hole In It." As is true of the club itself, the CD is upbeat and uplifting. The combination of musicians—including the singer/banjoist Barry Foulon, trumpeters Chuck Brackman and Charlie Fradella, and clarinetists Tom Fisher and Pete Fountain protégé Tim Laughlin—makes for a swinging good hour of traditional jazz.

One of the CD's treats is a recording of one of the band's most requested club songs, "St Louis Blues," sung by drummer Gerald French, a member of the musical multigenerational French family and son of bassist and crooner George French, who is often compared to Lou Rawls, only better. The apple did not fall far from the tree, as demonstrated in this sexy version of W.C. Handy's often-played tune, which would make Handy himself blush, knowing he had a part in its creation; with Fisher adding sultry sax solos and accents, and pianist Richard Scott's excellent chord choices and blues voicings, French sings like a blues master, all the while keeping the beat on drums in a "stripper" style.

Bassist and Fritzel's music director Bradford Truby has once again put together a great collection of traditional Dixieland jazz, performed by band members who play it seven nights a week in the city where it was born. You don't get much closer to the source. This is a great CD for anyone who enjoys old New Orleans jazz, as well as anyone who has spent a fun-filled evening with the band at Fritzel's. As to which volume is better? That's like asking someone to choose between gumbo and jambalaya. The answer is: both.

At The Jazz Band Ball; Original Dixieland One Step; Rockin' Chair; Weary Blues; My Bucket's Got a Hole in it; Shine; St. Louis Blues; L-O-U-I-S-I-A-N-A; Tin Roof Blues; Floating Down To Cottontown; The Riverboat Shuffle; Everybody Love My Baby; Down By The Riverside; Ice Cream; Tiger Rag.