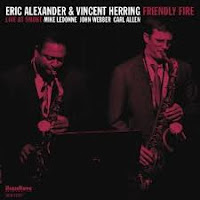 For those who long for the time when hard bop reigned supreme, Blue Note and Prestige Records were riding high, and no-holds-barred saxophone cutting contests and unscripted jam sessions were the order of the day, here's a sure cure for any lament that those days are lost and gone forever. From the opening notes of Friendly Fire, recorded live in August 2011 at the New York City supper club Smoke, the it's clear that the album's principal combatants, tenor saxophonist Eric Alexander and altoist Vincent Herring, have donned their gloves and aren't about to let the adversary across the ring gain the upper hand, while their seasoned corner men—pianist Mike LeDonne, bassist John Webber, drummer Carl Allen—lend unflagging support and encouragement.

The swift, full-throttle skirmishes (Hank Mobley's "Pat 'n' Chat," McCoy Tyner's "Inception") are interspersed with opulent ballads that give each of the front-liners a chance to show his warm and gentle side (Herring on "You've Changed," Alexander on the Nat "King" Cole classic, "Mona Lisa"). And even though these gentlemen can play the blues (Mobley's "Dig Dis" is an explicit case in point), it's clear that no one has the blues on a session that is genial and sunny from start to finish. Completing the program are the familiar "Here's That Rainy Day" (taken at a faster-than-usual tempo), a surprise Japanese pop hit from half a century ago, "Sukiyaki," and Herring's closing ballad, "Timothy."

ADVERTISEMENT
Not only are Alexander and Herring carrying on the tradition, they are among the most resourceful and enterprising saxophonists on the scene today. Alexander has yet to sculpt a solo that is less than persuasive, while Herring is irrepressibly candid in the manner of one of his main influences, the great Cannonball Adderley. As for LeDonne, Webber and Allen, suffice to say the co-leaders couldn't have done it without them. This is a rhythm section that any captain would be pleased to have as his (or her) crew. Whenever Alexander or Herring makes a sharp and unexpected turn, he can rest assured that everyone else is in step and ready for whatever comes next. While this live session may awaken memories of days gone by, it's as stylish and inventive as today.