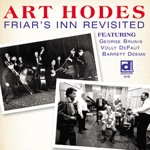 Delmark has hit the spot with this reissue in terms of music as social history. Trombonist George Brunis and clarinetist Volly DeFaut were both members of the New Orleans Rhythm Kings, a band that played Friar's Inn in Chicago in the 1920s, and at the time this music was caught—over the course of various dates in the late 1960s and early 1970s—they showed no diminution of their powers. Art Hodes, of course, had been following his own path through the music by this time, and that wealth of overall experience is manifested in every note here.

Hodes marked himself amongst piano players through his feeling for and knowledge of the blues, which resulted in him being regarded in some quarters as the blackest of the white piano players. The reality behind the reasoning is apparent on "Tin Roof Blues," where his solo is a model of trenchant but woozy economy.

What equally cannot be denied is the sheer joy of life these guys put across. This is abundantly evident on the venerable "Panama," where the buoyancy of Truck Parham's bass and the drums of Barrett Deems provide an exemplary model for the front line to work their magic over. It's clear here also, that DeFaut was his own man, the angularity of his phrases placing him at odds with the likes of, say, Edmond Hall. The exuberance of Nappy Trottier's trumpet also keeps the corn at bay.

"NORK Blues" lives up to its title in no uncertain terms, thanks in large part to Brunis' understated tailgating in the theme and, again, DeFaut brings the kind of knowledge that can only be derived from experience to the table. In solo here, too, Brunis doesn't use two notes where one will do, and his level of musical communication is raised accordingly.

"Sensation" again summons up the spirits in forthright fashion, and of course it's the case that Barney Bigard's clarinet brings a different flavor to the proceedings. Hodes, in brief solo on this one, seems to be acting almost as much as a two-handed prompt to the rest of the band as he is an advocate of his own musical ideas.

It's that joy of life that raises this music above the ordinary and makes it special. With the passing of guys like these it feels also like they might have taken the spirit with them, which only adds to its luster.