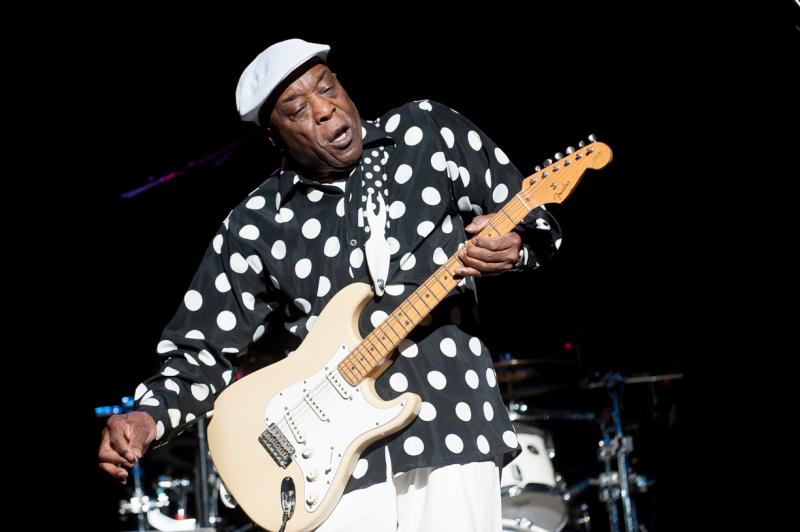 Fiery music that burned with intensity, eclectic compositions that shifted in time signature and tempo, sweet melodies and down-home dirty blues—all were heard at this year's Freihofer's Saratoga Jazz Festival in upstate New York, an event that is among the finest of its kind. It's a true outdoor festival where the musicians come to the audience within a venue that is gorgeous and relaxing.

The festival, forged by the father of all festivals, George Wein, 36 years ago, never slowed down when Wein stepped aside years ago, and this version was one of the very best in the last 20 years. There were the legends—McCoy Tyner, Tony Bennett, Buddy Guy, great veteran jazzmen—and young cats, and those in between who are really carrying the standard in recent years and building blocks to its bright future. So much fine music packed into two days, on two stages, enveloped by one grand picnic that officials at the venue—Saratoga Performing Arts Center in Saratoga Springs, NY—like to call "The Hang."

Producer Danny Melnick was even able to insert funk/pop and other elements that make some fans howl. It didn't adversely impact the proceedings at all. Jazz fans had all they'd need and then some, and the whole thing ended on Sunday night with one of the great showmen in rock and blues—mostly blues—who took off as only he can do. People smiling, laughing, dancing and going home happy, while at the same time having heard screeching, crying, preaching blues guitar from the guy at the pinnacle of his genre.

Melnick continues to hit home runs. He gets it. He was already thinking about 2014 as this year's giants wailed on stage—worthy of note, because some producers don't.

Guy, 76, can still testify, leading his tight-knit group through classics like "Damn Right I Got the Blues," "Hoochie Koochie Man," "Five Long Years" and more. His aura as well as his guitar lights up the place and his voice is strong. He's lived a lot of it, so his stories don't ring hollow. A staple of his shows is leaving the stage and walking through the audience while ripping off licks and toying with the crowd. The SPAC amphitheater, far more cavernous than a nightclub, didn't dissuade him. The people ate it up. These days, he also brings out his protégé on guitar, Quinn Sullivan, who is now 14 but started appearing on stage with Guy at the age of 8. The kid has got some chops and helped Guy burn through a few numbers. Fun stuff. Any time one sees Buddy Guy is a good day.

As for the other old-timer, Bennett came out and captivated the throngs at Saratoga like he does everywhere else. Always in a suit, this time white, he exudes class—not just in his music but the way he treats his audience. Warming and welcoming; talking to them in a very personal manner. He was about five weeks away from his 87th birthday, but the voice gave no indication. His range is limited (it never was grand), but he knows how to use what he has. Some lyrics he bellowed and held the notes long and strong. Of course, the music selections were of the Great American Songbook, irrepressible classics. "The Good Life," "I Left My Heart In San Francisco," "Maybe This Time." Ellington, Cole Porter, the Gershwins. Pure class.

Another band held some old-timers in terms of the calendar, but the music the Cookers played had nothing to do with age. Style was connected to bebop, perhaps, but neither they nor the music were dated. Bassist Cecil McBee, drummer Billy Hart and pianist George Cables have been around a while, but are first-rate. That trio alone would be an attraction. Toss in veteran trumpeter Eddie Henderson and you've got something. Add another fine older cat, Billy Harper on sax. Whew. Then a couple guys a bit younger: David Weiss on trumpet and Craig Handy on sax. The music flew. Swinging, but shifting and exploring. Mainstream at its best, with galvanizing solos. These guys are touring a lot, so their presence as a band, not as just stars from the Big Apple, was captivating. Scintillating, in fact.

So was the band of Rudresh Mahanthappa, one of the strongest voices on the jazz scene over the last decade, playing with the influence not only of the elders like Charlie Parker, but also borrowing things from Eastern music and his Indian heritage. His compositions from his new album Gamak (Act Music & Vision, 2013) are interesting to hear unfold, then the individuality of the solos puts great icing on the cake. David Fiuczynski on double-neck guitar is always cool to hear. With rock influences and jazz chops he created lines that held interest and created anticipation. And under Mahanthappa's lead playing, he didn't opt for comping but played odd contrapuntal lines, sometimes eerie effects. The two are mates in Jack DeJohnette's band and an empathy definitely showed. "Ballad for Troubled Times" showed they could do more than burn. A moody treat.

Tyner has played numerous times at the festival. This time, he carried Gary Bartz on sax, a man who's in his 70s and has played with many of the greats. He sounded blissful with Tyner, playing over some of the great compositions the pianist/composer has blessed the world with over the years: "Walk Spirit, Talk Spirit," "Blues on the Corner," "Aisha," "Fly with the Wind." Special guest was guitarist John Scofield, whose style also fits with Tyner, his angular and searching lines flying with the wind on each tune he played.

Gregory Porter is on his way to stardom as a jazz vocalist, with a deep, flexible voice drenched in soul. He and his excellent band tore through numbers from his acclaimed Be Good (Motéma Music, 2012), including the superb title track, as well as selections from Liquid Spirit (Blue Note, 2013), out this fall. He killed on his own compositions like "On My Way to Harlem" and "Real Good Hands" and woke up chestnuts like "Skylark." His blazing version of Nat Adderley's "Work Song" stirs the blood.

Donny McCaslin has been regarded among musicians as one of the finest saxophonists on the New York scene and his recordings under his own name are starting to show that. He's played with numerous important figures in music, but this cat is ready to step out in a big way. His music touched everything. It brought the heat. It was gentle and intricate. It was toe-taping and touching as well. Sophistication and a down-home feel through a set of music with the fine Jason Lindner on acoustic and electric keyboards, bassist Tim Lefebvre and drummer Mark Guiliana, who was a rhythm machine, providing all kinds of dense-but-supportive percussion. This group had fun, with Linder grinning broadly as he added weird electronics behind McCaslin's playing, the latter beaming with appreciation afterward. More is assuredly coming from this growing artist.

Similarly, trumpeter Ingrid Jensen brought many feelings to the stage with her sweet compositions, and with musicians she has worked with very often: Gary Versace on keynboards, Jon Wikan on drums and Matt Clohesy on bass. Jensen played melodic, mellifluous lines throughout all her creations, which could change like the shifting clouds within one tune, but never veered too far; never lost their beauty. She played strong, flowing lines that could hit 16th-note runs, then quiet down to the bare essence—influenced by Miles Davis, to whom she dedicated a tune, calling him "my ultimate idol." She used mutes to get different colors and textures, and directed the band sometimes with one hand while doing it. Jensen is an artist in the best sense of the word and the set was a distinct pleasure.

Guitarist Kevin Eubanks set swung at times, but also cooked with the thermostat all the way up, particularly on John Coltrane's "Resolution." He showed that his years on that famed TV gig didn't erode his chops. His sound meshed nicely and his fire was that of the leader. His new album with the same band, The Messenger (Mack Avenue, 2012) is a good one.

The baritone sax stalwart Gary Smulyan played his typical set—typically outstanding—searing through the jazz mainstream with Mike LeDonne on the Hammond organ, Paul Bollenback on guitar and Joe Farnsworth on drums. He never fails to please. Another guy who's also showing he never fails when he gets a chance to get his own group on the stage, is bassist Ben Williams. He's one of the great young bassists on the entire scene, and as such keeps quite busy. But his Sound Affects group does everything from swing to groove. The rhythm pocket is so solid, it must be a great ride for all the soloists, which included Matt Stevens, the guitarist who's known for his work with Christian Scott aTunde Adjuah. Stevens may not be as well known as some of his colleagues, but don't go to sleep on him. He's a guitar slinger and played his butt off.

Pianist Fabian Almazan is a fiendish pianist who's been plying his trade with the Terrence Blanchard band, interacting with cats like the great drummer Kendrick Scott. He played a set with some equally fine representatives of the younger age group in jazz, the wonderful Rudy Royston on drums and the strong and flexible Linda May Han Oh on the bass. They played great together, interpreting some very cool music from the pen of Almazan.

A bit disappointing was the Chris Bergson band led by a guitarist who had spent time with Levon Helm, and whose band played some good blues, but somehow seemed underwhelming. Good voice, nice guitar, not much pizzazz from the bandstand. For example, Chris O'Leary a singer and harmonica player who cut his teeth with Helm, was a blessing to the roofing industry in Saratoga a few weeks prior when he played three sets of high-voltage, fun stuff that tore the lid off and left the town shaking. Same lineage, different effect. Singer Brianna Thomas had a strong voice and a good band, but she relied too much on power and detracted from sections of her songs. Good and, good choices. Perhaps more seasoning will do the trick.

The 2013 edition of the Saratoga Jazz Festival will be hard to top, but the anticipation will have people looking forward to The Hang.