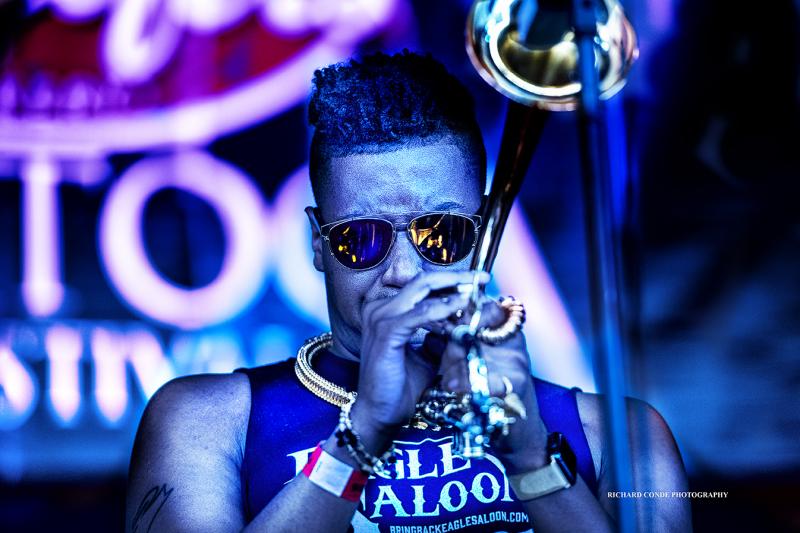 Plenty of fine music was presented at the 2016 version of Freihofer's Saratoga Jazz Festival by musicians young, old and in between. On piano, for instance, it ranged from Joey Alexander, who turned 13 on the day he performed, to Chick Corea, who turned 75 two weeks before he performed.

But special kudos for the weekend were laid upon Corea, who, prior to his blazing trio set, was honored by the venue—Saratoga Performing Arts Center—with a star on its Walk of Fame. Corea was making his ninth appearance at the festival [this year was the 39th edition] and joined festival founder George Wein as the jazz people receiving that honor.

He promptly went out there tore it up with bassist Christian McBride and drummer Brian Blade.

"Christian and Brian are some of my favorite musicians in the world," he said prior to the event. "We always have a blast playing with one another. There's a magical rapport when we play together."

Indeed there was, as he ran through songs from various stages in his career, including "Alice in Wonderland," Bud Powell's "Tempus Fugit" and the Miles Davis classic "All Blues." At every turn, Blade and McBride were there and it could even be said their driving intensity led Corea to higher ground. They were as hot as the weekend weather, which soared into the 90s.

Christian Scott aTunde Adjuah scorched the grounds with his young, fierce band playing what he calls Stretch Music, and a group of veterans comprised a Steps Ahead Reunion band that played selections from their years together, even if some of the original musicians are gone. The Bria Skonberg quintet showcased another young talent, with the leader on both trumpet and vocals.

Played out over two days on two stages, it was hard for a fan not to be in front of a band that they wouldn't enjoy.

Alexander's coming out party in upstate New York featured a birthday cake ceremony. On stage, he kicked off his set with two John Coltrane numbers, "Resolution" and "Giant Steps." the much-hyped youngster played some angular lines with his trio and showed a knack for handling dynamics as well as being able to improvise. There's a lot that won't be known for a few years.

At the same time on the gazebo stage at the back of the grounds, saxophonist Vincent Herring was on fire. He has a vibrant, syrupy tone that takes something from Cannonball Adderley, including a penchant for bluesy licks. He made a blue out of the pop tune "Just Squeeze Me" that brought it into a whole new place. On piano, Mike LeDonne show what the 88 keys can really do—blues and bop and things in between. It was hard for them to go wrong with bassist Dave Williams and drummer Carl Allen's crazy solid foundation. Herring showed a soft enchanting side on the ballad "You Leave Me Breathless." One of the best sets of the weekend.

Scott's band is extremely intense and brings in influences from his generation, like hip hop, but also other twists. "Twin" showed off the amazing drummer Corey Fonville, who can seemingly play anything and has a motor handed down from Mount Olympus. The trumpeter, whose every phrase seems like a clarion call, explained his Stretch concept, but also played Coltrane's "Equinox" and Herbie Hancock's "Eye of the Hurricane," because "we're at a jazz festival," he said. The set closed, though, with his composition "Last of the Chieftains," which was impressive. Also distinguishing themselves in the band were 20-year-old flautist Elena Pinderhughes and saxophonist Braxton Cook.

Legendary guitarist Pat Martino was up to his billing as a master guitarist. Sitting mostly still with an unassuming manner, his fingers flew over the frets over the Hammond B3 work of Pat Bianchi. He added saxman Adam Niewood and trumpeter Alex Norris to the mix—their solos were strong and buoyant.

Allyson's set was billed as a Rodgers & Hammerstein tribute, and while she did a few of those standards, her best, and most poignant considering today's world situation, were "Everybody's Cryin' Mercy" and "I Don't Worry About a Thing" from the Mose Allison songbook. She played accompanied by bass and keyboard and also sat down to accompany herself at the piano in a serene set.

Skonberg plays with elan and a bright tone on songs in the swing era mode, but also can get meander and faster on other selections. She's a bright presence on the stage and her voice, while not a strong instrument, relies on phrasing that she has learned from playing an instrument. She negotiates the song with her voice in a pleasant fashion, then blows strong. She can be bluesy also.

Jamison Ross won the Thelonius Monk International Jazz Competition for drums in 2012. He plays with great style and groove. But what he wins people over with is his voice, singing old standards like "Don't Go to Strangers" and "Bye Bye Blues" or his own compositions like "Deep Down in Florida." His phrasing and tone comes from soul musicians the likes of Stevie Wonder, but it's a sound that comes naturally from his own heart. The joy he exhibits is infectious. Shemekia Copeland's brand of R&B and blues is different. She has the pipes of an old-style blues singer and her emotional peaks come from that vantage point. She was also playful and bawdy at times and it's always a good set of music.

The Steps Ahead Reunion featured Mike Mainieri on vibes, George Garzone on sax, Eliane Elias on piano, Marc Johnson on bass and drummer Billy Kilson. Each is a strong musician. Kilson is smooth as silk and explosive as well. Johnson has long been one of the idiom's finest players. Garzone provided an edgy sax style that mixed well with the quicksilver vibe work of Mainieri. Elias is joyous, playing with a lot of heart and emotion carried out with her monster chops. She contributed the compositions "B is for Butterfly" and "The Time is Now" to the strong set.

Notable piano sets on the intimate gazebo stage, always a venue for remarkable music, were turned in by Elio Villafranca, from Cuba, and the rising talent Aaron Diehl. They have different styles, but sweet chops and their musical expressions on this weekend were remarkable.

The festival heads into its 40th edition next year. Well worth the wait.