By MARSHALL BOWDEN
February 10, 2003
Sign in to view read count

How ironic...that the Negro, who has exemplified the humanities in his very existence, is being rewarded with inhumanity. —Sonny Rollins 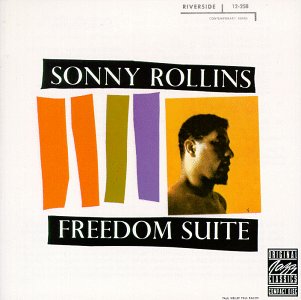 In 1956 Sonny Rollins was one of the best-known tenor saxophonists in jazz, having recorded and released two wonderful and classic jazz albums, Saxophone Colossus and Tenor Madness, the latter being a tenor standoff with John Coltrane. In the following two years, freed from his Prestige Records contract, Rollins set about making some great records that were released on a variety of labels, including Riverside, Contemporary, and Period. He released Way Out West and worked with Thelonious Monk. Yet, even as his career ascended he was faced with the specter of racism when he attempted to rent an apartment in New York City. "Here I had all these reviews, newspaper articles and pictures," Rollins later said. "At the time it struck me, what did it all mean if you were still a nigger, so to speak? This is the reason I wrote the suite." "The suite" refers to the famous composition "Freedom Suite," a nineteen minute piece that featured Rollins, accompanied only by bass and drums. It was jazz music's first explicit extended instrumental protest piece, and its intentions were signaled in the original liner notes written by Rollins: "America is deeply rooted in Negro culture: its colloquialisms; its humor; its music. How ironic that the Negro, who more than any other people can claim America's culture as his own, is being persecuted and repressed; that the Negro, who has exemplified the humanities in his very existence, is being rewarded with inhumanity."

The piece, a series of variations on fairly simple melodic material, caused a sensation, but Riverside Records decided it was too incendiary and pulled the recording, reissuing it under the title Shadow Waltz, the name of another track on the recording. Orrin Keepnews, the producer and part-owner of Riverside Records, wrote a new set of liner notes that stated Rollins' intentions much less succinctly:

"This suite, then is 'about' Sonny Rollins: more precisely, it is about freedom as Sonny is equipped to perceive it. He is a creative artist living in New York City in the 1950s; he is a jazz musician who, partly by absorbing elements of Bird and Monk and many others, has evolved his own personal music; he is a Negro. Thus the meaning of freedom to Rollins is compounded of all this, and, undoubtedly, much more. In one sense, then, the reference is to the musical freedom of this unusual combination of composition and improvisation; in another it is to physical and moral freedom, to the presence and absence of it in Sonny's own life and in the way of life of other Americans to whom he feels a relationship."

Keepnews is certainly not altogether wrong in his assessment, but he certainly pulls back some of what Rollins made very specific in his statement. Rollins' statement that "America is deeply rooted in Negro culture" was, in 1958, a bold statement, to say the least. Yet he demonstrates it quite ably in his themes and the improvisations he unfurls during the course of the suite. Thelonious Monk, who was extremely influential in Rollins' development, told the saxophonist to "play the melody, not the changes," and Rollins seems to have followed that advice well. He never gives the impression that improvisation is a mechanical or mathematical process based on the chord changes, instead following his melodic inspiration wherever it may lead. On "Freedom Suite" he plays with his various themes until the listener becomes aware, slowly over the course of the work, that they are interconnected. This attention to the melodic structure of improvisation as well as its harmonic structure has made Rollins one of jazz music's most celebrated improvisers. Indeed, Rollins provides the complete melodic content of "Freedom Suite," accompanied only by the bass work of Oscar Pettiford and the powerful drumming of Max Roach, who would go on to record the equally important (though currently unavailable) We Insist: Freedom Now Suite with then-wife Abbey Lincoln, Oscar Brown, Jr. and saxophonist Coleman Hawkins.

Things were tense at the time of Freedom Suite 's release, and one can perhaps understand the forces that made Keepnews soften Rollins' verbal argument. What Rollins was saying, that African Americans represented the essence of American culture but were oppressed by a group (white Europeans) that had essentially seized that culture for their own purposes, was pretty radical. 1957's Little Rock school integration incident was fresh in people's minds, and there was more civil rights turmoil to come. Still, Keepnews' assertion that "Freedom Suite" "is not a piece about Emmett Till, or Little Rock, or Harlem, or the peculiar local election laws of Georgia or Louisiana, no more than it is about the artistic freedom of jazz" seems designed to divert attention from Rollins' real message, even as it reminds the reader of a laundry list of grievances about which African Americans increasingly refused to be silent. Make no mistake, "The Freedom Suite" is a cry of protest against America's treatment of African Americans from the days of slavery right up to the day of its recording, but it is the cry of a profoundly introspective and intelligent man who expresses himself chiefly through the exercise of his art. As such, it may not appear terribly radical or groundbreaking today, but its power is clear from the fact that Rollins' brief statement about his work was, for all intents and purposes, subject to censorship at the time of its release.

Fast forward to 2002. Tenor saxophonist David S. Ware and his quartet, comprised of pianist Matthew Shipp, bassist William Parker, and drummer Guillermo E. Brown, convene in July in Brooklyn's Systems Two Studio to record a new version of Rollins'masterpiece. Their version honors the spirit and the basic structure of the original, but also takes chances and explores some additional territory hinted at but not explicitly examined in the original. The piece is now nearly twice its original length, but this additional length does not come from merely allowing the players to spend more time blowing within the piece's harmonic structure. No, instead Ware builds on the piece, adding a free interlude between the first and second parts, and integrating the whole into a beautifully conceived, epic piece.

One interesting aspect is the addition of piano to the composition. Since the original was recorded with only tenor sax, bass, and drums, this already requires a serious re-imagining of the work. Shipp has already proven himself very adept at fitting into pretty much any musical situation, and he does not disappoint here. He adds a foundation that functions as a well from which all other members of the quartet draw energy and inspiration, never really drawing attention to himself, but allowing a great deal of expansiveness in Ware's conception of the piece.

For his part, Ware utilizes a greater variety of sounds on his version of the Suite than Rollins did. Not long after the release of the original Freedom Suite Rollins retired for a time from performing and recording. When he emerged in 1962, he was playing in a much more unambiguously free style and working with a group of avant-garde musicians. It is clear that Rollins was working on incorporating a wider variety of sounds and improvisational elements usually associated with free jazz, and he had spent the time since the release of Freedom Suite reinventing his approach. Ware, whom Rollins took under his wing in his early years, makes Rollins' free jazz leanings much more overt in his version of the piece, and I don't doubt that the piece might have leaned much more toward free jazz had Rollins recorded it a couple of years later. That said, the piece never becomes a free jazz blowing session, at least in part because Shipp's playing allows the others more freedom while simultaneously maintaining a clear base of operations.

The question that cannot help be asked by listeners to this piece would be "Why has Ware chosen to record Freedom Suite, and why now ?" First, the piece is a very influential piece of tenor saxophone music, and for anyone playing the instrument it is a real yardstick, much like Coltrane's A Love Supreme. To record Rollins's composition and put one's own stamp upon it is clearly a rite of passage for an adventurous tenor player. Branford Marsalis chose to record a version of the piece on his 2002 album Footsteps of Our Fathers. Marsalis's version is much closer to Rollins's version, but it is well performed and offers a combination of swing and sly wit. Still, one cannot help but feel that Ware comes closer to expressing the original feelings and content that Rollins intended, and his realization definitely adds something to the work.

Ware's other reasons for recording Freedom Suite remain more personal. No doubt he also wished to express his musical debt to Rollins. "This is a perfect opportunity to show the link between me and Sonny," explained Ware in an interview earlier this year, "an opportune time to show how one generation is built upon another and how the relationships work in the whole stream of music that's called jazz." One is also tempted to remember the story of Rollins' censorship upon the release of the original album and see a parallel with the possible erosion of civil liberties in the wake of 9/11. That, of course, takes a piece that is very clearly about the liberation of African Americans and expands its context beyond what the composer intended. If should also be pointed out that Ware has made no statement that would support such an interpretation. It really doesn't matter, though; Freedom Suite stands as a vibrant and original piece of music.