Various Artists: Freedom Of The City 2006 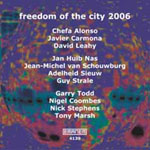 The Freedom Of The City Festival has taken place annually in London, England for a number of years now and Emanem have been on hand on a number of occasions to get some of the music down for posterity. If the evidence on offer here is anything to go by it's nothing but a worthwhile endeavor.

The musicians performing here come from places as far apart as Spain and New Zealand which, if nothing else, is evidence of how widely understood what might be called the vocabulary of free improvisation is. Soprano saxophonist Chefa Alonso and bassist David Leahy come together to form a trio with drummer Javier Carmona that's as alert to the demands of the musical moment as it is to the perhaps greater endeavor of fashioning a coherent overall musical statement. On "Chachara they eschew the limits of conventional vocabulary and, in the case of Alonso, the degree to which she fashions her own voice on an instrument that in this field is not lacking in significant players is notable in itself. Only intermittently does she echo Lol Coxhill for example, whilst the likes of Steve Lacy and Evan Parker are both potential influences significant by their absence.

The quartet of Jean-Michel Van Schouwburg, Adelheid Sieuw, Jan Huib Nas and Guy Strale produces music on "Okgnig I that is by turns tentative yet coherent. Vocalist Van Schouwberg, however, does not seem to adhere to a group aesthetic in the way that the likes of Phil Minton or Maggie Nichols would. The practical effect of this is a kind of impedance to the music's flow, and too often he seems to be making sounds simply for the sake of it.

"Stipple —performed by tenor saxophonist Garry Todd, violinist Nigel Coombes, bassist Nick Stephens and drummer Tony Marsh—is, by contrast, an extraordinary piece. The dynamics of the music are never less than compelling, and Todd is a player whose work evokes that of Lou Gare with AMM. This is nothing other than welcome. The work of Stephens and Marsh is that of a rhythm section in name only and, in a polyphony of voices, there's nothing other than equals. The overall result is music that passes the repeated listening test with flying colors, so elusive are many of its secrets.

Even if one unkindly disregards the second piece documented here, there still remains almost an hour of compelling music; it would only be churlish to select one piece in preference to the others. In short, anyone with an interest in free improvisation and its theoretically infinite possibilities will get something out of this disc.