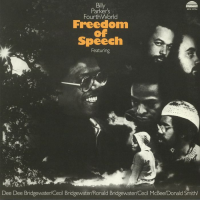 Drummer Billy Parker's 1975 album only tangentially connects to Fourth World music, the pancultural style which was given its name five years later by Jon Hassell on Fourth World Vol. 1: Possible Musics (Editions EG, 1980), the trumpeter's first collaboration with Brian Eno. Parker's Fourth World is the name of the band heard on Freedom Of Speech, which, Parker says in his sleeve note, "was born out of the need to preserve and develop on a tradition brought to these shores from Africa centuries ago." The angry, urgent, post-hard bop going on free, in-the-moment music on Freedom Of Speech—which was originally released by New York label Strata-East and in spring 2018 has been reissued on vinyl in the UK by audiophile label Pure Pleasure—is light years away from that forged by Hassell. And different emotional intensities aside, Parker's album lacks any of the invasive recording-process manipulations that define Hassell's oeuvre. Freedom Of Speech is at the politicised end of the African American spiritual-jazz movement for which Strata-East, along with the bigger Impulse! label, was a key platform in the 1970s. Parker, a hard swinging and hard driving drummer, was little known outside the African American jazz community in New York in the mid 1970s and apart from Freedom Of Speech he is now all but lost to history. He was sufficiently well thought of in musicians's circles at the time to assemble a cracking band for the album. The A-listers are vocalist Dee Dee Bridgewater, hot from recording her debut album, Afro Blue (Trio, 1974), and bassist Cecil McBee, then a member of Lonnie Liston Smith's Cosmic Echoes and Pharoah Sanders's band. They are joined by Bridgewater's husband, trumpeter Cecil Bridgewater, his brother, tenor saxophonist Ronald Bridgewater, and Lonnie Liston Smith's brother, pianist Donald Smith. Parker, McBee, Smith, Ronald Bridgewater and Cecil Bridgewater each wrote one of the album's five tunes. Freedom Of Speech is one of only a few recorded examples of Parker's work—another is the title track of trumpeter and Strata-East co-founder Charles Tolliver's Impact (Strata-East, 1976). He appears to have freelanced around New York until the mid 1980s, when he joined the State University of New York's Rockland Community College, where he built and led its jazz programme before passing away in 1996. Until at least 2002, the college organised an annual Billy Parker's Fourth World Legacy Concert in his memory. And that is practically all that is in the public domain about Parker's life. As recorded legacies go, Parker's is brief in the extreme. It is a matter of feeling the quality, not the width.

Side A: Dance Of The Little Children; Gemini’s Lullabye; Home. Side B: Get With It; Freedom Of Speech.