By IAN PATTERSON
October 2, 2019
Sign in to view read count 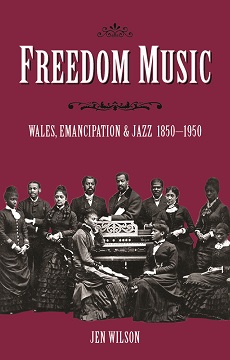 The emancipation in the title of Jen Wilson's deeply researched book is two-pronged. On the one hand it refers to African American slaves risking their lives to escape pre-civil war plantations and gain freedom. On the other, it references the battles of Welsh women, in roughly the same historical period, for social, political and economic equality. If the link seems tenuous, then Wilson, jazz pianist and founder of Jazz Heritage Wales, entwines the narrative chords, from the very first page, with the 1889 obituary of one Jessie Donaldson.

This Swansea woman and her husband, The Cambrian reported, were abolitionists whose Cincinnati house was a station on 'the underground railway' that guided escaped slaves to freedom. Before them, Donaldson's aunt, Anna Margarita Donaldson, and her uncle, Francis, had emigrated from Wales to Cincinnati in 1822, where they engaged in anti-slavery activism. The Donaldson family, therefore, was a conduit for liberated African Americans who then made their way to Wales, bringing with them their slave songs. Adapted for the stage, these spirituals became a huge hit with Welsh and British audiences long attuned to African Americans' struggle for freedom.

Wilson treats Wales' part in the history of slavery with an even hand, honoring the strong abolitionist movement in Wales whilst acknowledging the country's significant role in the slave trade. Welsh firms exported metal to Africa, transported slaves to the West Indies, and imported sugar, tobacco and rum to Britain. The author's academic rigor does not hamper her style, which brings the history vividly and convincingly to life.

Wilson describes how the heavy industry of the industrial revolution saw a dramatic growth in Welsh cities and with it the expansion of the entertainment industry. Minstrel shows from the 1830s to the beginning of the twentieth century were hugely popular, with initially, mostly white performers in 'blackface.' Their banjos, percussion and dance were, the author states, "all part of the early soup that evolved into jazz."

African American spirituals in essence, the author states, were not completely unfamiliar to Welsh audiences brought up in the Welsh Baptist tradition of hwyl -a half shouted, half-sung sermon with call and response between minster and congregation. Wilson translates hwyl as "a state of being or condition...a stirring feeling of emotional motivation and energy." The African Americans and Welsh, the author intimates, must have seen common cultural ground in each other's emotional forms of expression. And just as Welsh minstrelsy adapted African American spirituals and songs about plantation life, early African American artists in Wales tailored their music and performance style to suite the tastes of the day.

Wilson dedicates a lot of ink to these early African American troupes, chief among them being The Fisk Jubilee Singers, of Fisk University, who strike a very dignified pose in formal Victorian dress on the book jacket. This a cappella choir was a far cry from 'nigger minstrelsy'—the common term of the time— and, the author claims, it overturned cultural expectation in Wales with performances of "concert-hall authority and great dignity...".

Significantly, The Fisk Jubilee Singers, the majority of whom were women, had "a profound effect on the preconceptions of white audiences", particularly, the author stresses, for white, working class women. These former slaves challenged stereotypes of black women's cultural identity and provided positive role models. That the group frequently did fundraising concerts for the poor of Wales and England only increased its popularity and its Fisk Jubilee Songbook sold in the thousands.

Drawing on author Lynn Abbot, Wilson affirms that the Fisk Jubilee Singers' performances were "an early expression of Black Pride," with each concert representing "a civil rights demonstration."

Wilson's entwining of the intercultural exchanges between American/Afro American and Welsh culture, and her depictions of the gradual coming into being of jazz, make for a compelling tale. Equally important is the author's account of the rise of feminism in Wales, seen through the prism of jazz. The availability of cheap pianos and the drain on men caused by World War I combined to open new opportunities for women. Where previously playing the piano had been considered a domestic accomplishment, it would become for many talented women a source of employment.

From minstrelsy to ragtime and swing, Wilson charts the progress and overlapping of theatre entertainment and jazz, foregrounding the many women artists of the day. Women were employed as jazz musicians in the hugely popular cafés that proliferated, in hotel lounges, restaurants, on department store roof-gardens, and later, in ballrooms. The author acknowledges that there is ,"scant historical evidence of what 'jazz' music in Wales actually sounded like" in its early years, though it was clearly associated with entertainment, dance and fashion by its many adherents, and with sinning by the more righteous.

If the outrage of the church at what it perceived as the immorality of jazz and dancing manifested itself in racist and often anti-Jewish vitriol, then women performers were singled out for particularly damning attacks from those holding the moral high ground.

Female jazz musicians were also subjected to the worst form of patronising and denigrating comment from male critics. Reviews of the day reveal a systematic and ingrained misogyny from male journalists/jazz critics towards female jazz musicians that beggars belief from today's vantage point. Even then, women must have felt both incredulous and furious at the utterly dismissive manner in which they were treated by the male press.

Welsh female jazz artists, it seems, were all but denied recording opportunities and accorded precious little airtime on the radio compared to their male counterparts. Writing in Melody Maker in 1928, Molly Pearl made this prescient observation: "Recording and broadcasting may be open to our sex when man ceases to be the sole governing power in these directions."

Wilson laments the fact that a pioneering all-female swing band such as the Ivy Benson All-Girl Orchestra, which enjoyed great popularity in England and Wales during World War II, is omitted from most histories of big bands.

In this fascinating book Wilson does much to address the imbalance in jazz histories that have written women's contributions out or relegated them to footnotes at best. Wales in the jazz age comes across as a culturally vibrant place and women were not going to miss out on the fun.

Welsh women's growing assertion of their rights to economic and socio-political independence as the twentieth century cranked up posed a threat to male hegemony and was shocking for the moral gatekeepers. The backlash, particularly against women pursuing a profession in jazz, was vicious, though as Wilson demonstrates, this did not deter many from fighting for their right to swing.

Wilson's focus is on the why and how of jazz in Wales, and for this reason her story doesn't venture beyond the beginnings of modern jazz. The strong impression that emerges from these pages is the notion of jazz, from its African American slave spirituals and entertainment roots, to its ragtime and swing popularity, as a music of freedom.

Welsh women had to fight the educators, the press, the promoters, the broadcasters, their male peers and the prevailing social conventions just to play jazz, a state of affairs that might well resonate with many women today, despite the much greater number of female role models.

The fruit of decades of work dedicated to Welsh jazz heritage, Jen Wilson's Freedom Music will be of interest to anyone interested in the origins of trans- Atlantic jazz, specifically in Wales, and the tumultuous historical circumstances—on both sides of the ocean—that engendered it. From plantation-era Cincinnati to the principal stages and social venues of Welsh cities, Wilson's telling of how jazz came to be in Wales is a tribute to the women pioneers of radically different backgrounds, and one that invites further research into a neglected story.