By NENAD GEORGIEVSKI
September 27, 2015
Sign in to view read count 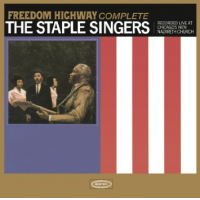 Music has always been the perfect medium over which people expressed their dissatisfaction and protested social injustices. As such it has a tremendous ability to show the world from the perspective of the oppressed. During the '60s in US the revival of protest music was propelled as a reaction to the social changes and turmoils during that turbulent and dark period, from the civil rights movement to anti war movement. A myriad of musicians have used their music to address or protest the social injustices which spoke to masses. These songs, be it gospel, folk or spirituals, played an important role. They were a stirring accompaniment to the movement as it motivated people through long marches, mass meetings or sit ins as it gave them strength through harassment and troubles while trying to instigate changes.

The gospel group Staple Singers, led by "Pops" Staples, became involved in the civil rights movement and sang those songs to people at rallies and protests. Their unique blend of gospel with blues propelled by Pops' bluesy guitar, Mavis Staples' powerful voice and the heavenly harmonies of Cleotha and Yvonne Staple sat in the middle between the rural harmonies of the South and the sounds of rock and soul. The group was founded in the '40 and during the '50s and it established its reputation by performing at Chicago's churches. From there it began recording for smaller and independent record labels until in the '70s they began recording for Epic and Stax. But during the turbulent '60s they were eventually more and more embraced by audiences that listened to folk music. Even Bob Dylan announced at the Newport Folk Festival in 1963 that he wanted to marry Mavis Staple. Their music broke musical walls and inspired civil rights leaders. They often performed at rallies together with Martin Luther King. The Freedom Highway performance was recorded just weeks after Martin Luther King led the march from Selma to Montgomery in Alabama, an act that was crucial in the the passing of the Voting Rights Act five months later.

Recorded on the 9th of April 1965 at the group's local parish of the New Nazareth church in Chicago, this album is an absolutely magnificent and diverse collection of songs that reflect the times it was made in. While now it is considered to be an important document of a performance that reflected the wish for a racial equality and more just society, back when it was first released, it was considered to be a commercial failure and very quickly it went out of print and into relative obscurity. As faith would have it, a several decades later, Legacy producer Steve Berkovitz came across to information about this recording that many didn't know it existed and later tracked the masters in the vaults. 50 years after the performance took place here comes a complete recording of this historic event.

The musical and emotional diversity of these songs speaks to the circumstances under which they were performed and recorded. Recorded on location in all of its rawness, consequently, the songs are characterized by spirited performances of a group at the peak of its powers with a prevailing electrified ambiance permeating every corner of the church. These songs also reflected the sign of the times and the wishes of the people that took part in this historic event. These people were inspired by the promise of a better tomorrow and the songs were imbued with it. As a result Freedom Highway Complete is a charged and impassioned offering, executed with fervor and soulful intensity in front of an electrified crowd.

The repertoire consists of classical gospel tunes such as "When the Saints go Marching In" and "What You Gonna Do?,"" the unofficial anthem of the civil rights movement "We Shall Overcome," a song written by singer Hank Williams "The Funeral" while the remaining songs are either extended or unedited versions of previously released songs such as "Freedom Highway" "Help Me Jesus" and previously unreleased gems such as "Samson and Delilah," "View the Holly City." As faith would have it, these songs are finally seeing the light of the day on its 50th anniversary

The songs sang on this record by The Staple Singers defined an entire era. This record is an invaluable introduction to many things, from the power and breadth of gospel music, to the sheer determination of the people for a racial equality and better tomorrow through their music. The music allowed these musicians to give strength and inspiration to their own community which is an equal partner on this recording. It stands at the crossroads of one of the most turbulent periods in American history. Freedom Highway Complete is not only one of the great live albums, but simply one of the great albums ever.

Intro by Pops Staples; When The Saints Go Marching In; The Funeral; Build On That Shore; We Shall Overcome; Freedom Highway; What You Gonna Do?; Precious Lord, Take My Hand (unreleased); When I'm Gone; Help Me Jesus; Rev. Hopkins/Offering; Jesus Is All (unreleased); Samson and Delilah; View The Holy City; Tell Heaven; He's All Right; Pops Outro/Benediction.

About The Staple Singers