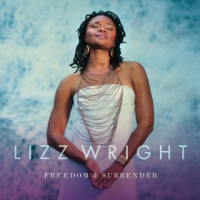 Few musicians, that have been commercially successful and artistically praised, have, at the height of their popularity, decided to take a hiatus to discover themselves. Renowned expressive vocalist Lizz Wright, did just that, and guided by a warrior spirit, propelled her music into a renewed direction on Freedom and Surrender. After a string of acclaimed records for the Verve label, and a number of guest side projects, Wright signed with Concord Music Group, savoring the opportunity to create music on her terms. Under the inspiring production of Larry Klein, this release is a slight contrast from previous work, depicted with a broad palette, her superior vocal gifts on full display.

Wright is recognized as a premier contemporary jazz vocalist, noted for absolute dominance of whatever resembles gospel, and personalizing any song she interprets. Evidence of this continues, with a variety of moods achieved, each configured for her particular touch. Working mostly with original compositions, she reveals secret longings on "The Game," and "Here and Now," then continues this seduction on the dance groove of "Lean In." That thin line where sacred crosses into secular, creating soul, is where Wright thrives, extending overt sensuality on "The New Game," and "You." Gospel is her undisputed roots, and "Blessed The Brave," is as righteous as anything she has done, while converting the Bee Gee's "To Love Somebody," into a sanctified hymn.

Wright has been quite apt at acoustic settings, and is comfortable working with folk textured themes. Certain songs reveal a return to the earth and indicate rural landscapes of mountains, rivers and streams, which represent solace and solitude. "Somewhere Down The Mystic," is a delicate tale of simple beauty sought in nature, that is accented by contrasting chordal crescendos which are a jolt from the idyllic scenario. This song reveals a lot about how Wright has matured as an artist, and advanced as a person, spiritually aware of her surroundings. "Real Life Painting," continues with introspection and revelation, and her cover of Nick Drake's "River Man," is a sad and somber affair, as songs of rivers often are.

This time around, Wright is again reunited with friend and gifted songwriter Toshi Reagon, who collaborated on previous records. Reagon contributes the candid album opener "Freedom," about the unyielding desire for something so elusive for so many, while "Surrender," is an emotional love ballad, needing no further explanation. Gregory Porter is featured on "Right Where You Are," an exquisite romantic duet, by two of the best singers around.

Triumph and the accolades that followed, came early and plentiful for Lizz Wright, who managed to maintain the high standard and expectation of creative output set for her, while adhering to steadfast core beliefs, remaining focused, and continuing to produce extraordinary music. Freedom & Surrender, is the right album at the right time for an artist who does not compromise her talent, and utilizes it to the most of her ability. Blessed the brave.

Freedom; The Game; The New Game; Lean In; Right Where You Are; River Man; Somewhere Down The Mystic; Real Life Painting; To Love Somebody; Here And Now, You; Blessed The Brave; Surrender.