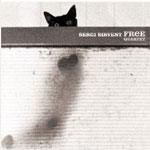 Sergi Sirvent is an interesting young pianist whose style is hard to pigeonhole. To his credit, he is shaping a thoroughly original approach to jazz piano improvisation. On the other hand, his improvisations sound fragmented at times, almost as if they were a series of isolated phrases and ideas with insufficient connective tissue.

In the CD booklet Sirvent says, "I wanted to try and investigate more in hearing the chords rather than writing them down." In other words, he's seeking a dramatic expansion of a song's chord changes. However, Sirvent's harmonic approach doesn't sound especially radical or "outside." His chord voicings are dense, yet voiced with the idiosyncratic touch that is one of his strongest assets.

But if Sirvent's harmonic approach is surprisingly conventional, his rhythmic explorations are consistently exploratory and appealing. By using two drummers, Sirvent creates a wide palette of rhythms, all of which interlock and tumble forward with swinging momentum. The level of rhythmic interplay on Free Quartet is exceedingly high as the two drummers churn in and around an aggressive bass walk. Sirvent places his phrases in the maelstrom to maximize their forward motion and momentum. In other words, for all its complexity, Sirvent's music swings... and sometimes it swings hard.

It's telling that Free Quartet includes three Ornette Coleman compositions. In the booklet, Sirvent acknowledges his debt to the great saxophonist and composer. It's also notable that in so doing, Sirvent, a pianist, is tackling music that was originally conceived to exclude a piano. And that seems to be Sirvent's goal: to find a place for a chordal instrument in a music that is played without pre-arranged chord changes. Of course, this has been the goal of the most far-reaching jazz pianists for a very long time (Paul Bley comes to mind). Sirvent reminds the listener that the piano is, after all, a percussion instrument, and if he has yet to fully integrate his harmonic and rhythmic ideas, he has still created an approach with some real promise.

J-zone; For Colores; Lonely Woman; You Look Flat; You Look Sharp; Peace; When Will The Blues Leave; Sun Ra Inspiration.