Frank Rosolino: Free For All

By DAVID RICKERT
September 1, 2000
Sign in to view read count 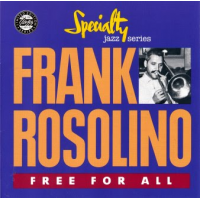 First the bad news: Frank Rosolino took the life of his two children and then shot himself in 1978 after a lifelong battle with depression. The good news: in 1959 he recorded Free For All a wonderfully spirited set that belies the psychological problems that plagued the trombonist throughout his life. Rosolino spent the first part of career honing his chops in the Stan Kenton band, like many of the West Coast musicians of the time. He developed an agility and melodic sense equal to that of any trumpet player.

After a stint with the Lighthouse All-Stars, Rosolino was given the opportunity to record this quintet session with fellow West Coasters, which features the usual mix of originals and standards. Right from the start, this session promises to be something exceptional as the disc starts off with an off-kilter, waltz-time intro to "Love For Sale" which leads into some spirited soloing from the horns and punchy comping from Feldman. This sets the tone for the entire session, which is irresistibly jubilant throughout; even "Stardust" swings gently under Rosolino's textured playing (he should be commended for giving this overworked standard new life). However, the band really comes to life on the up-tempo numbers, where Land and Rosolino keep tight formation on the heads and then blaze off into playful solos while Levey sizzles underneath.

This album is one of the few sessions that this neglected trombonist ever made as a leader and is a fitting testament to his achievements. Free For All captures an artist at a pivotal point in his career making the transition from big band work to small-group session while being haunted by inner demons. Make no mistake about it; Rosolino was capable of making exciting music that more people should hear.