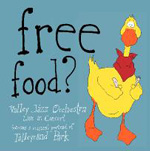 It's unusual, to say the least, to encounter a big band album whose opening five-movement suite is dedicated to a local park. But such is the case with Free Food?, on which the Pennsylvania-based Valley Jazz Orchestra pays its respects with "Village Green, in Blue," a musical portrait of Bellefonte's Talleyrand Park written and arranged by the orchestra's co-leader, tenor saxophonist Rick Hirsch.

The VJO, a semi-pro ensemble that has been performing weekly for the past six years at the American Alehouse near State College, Pennsylvania, acquits itself rather well on this largely entertaining concert date, recorded in November '05 at Bellefonte's Garman Opera House. The fly in the ointment, as is often true of live performances, lies in the recording itself, which also sounds semi-pro, deflecting one's intention to glean a true picture of the orchestra's proficiency. The VJO sounds pretty good, but I've a hunch it would have sounded better under more agreeable circumstances.

Be that as it may, there's some decent music being played here, and a number of respectable charts, the best of which—and this isn't even a contest—is Bill Holman's off-center arrangement of "You Go to My Head, nicely played by the orchestra (in spite of some audible lapses, especially in the trumpet section) behind pleasant solos by Hirsch, trumpeter Derek McDonald and the VJO's only full-time "pro, alto saxophonist and co-founder Dan Yoder, who's a professor at—I'm guessing—Penn State (Hirsch merely says "at a Big Ten university, but that's the only one east of Ohio, unless he commutes).

Besides the tunes already mentioned, the VJO performs "Besame Mucho, Benny Carter's "Miss Missouri, Matt Dennis/Tom Adair's "The Night We Called It a Day, Gordon Goodwin's lively "Sing Sang Sung and "Bohemian Rhapsody, which according to its introduction must have been popularized by a group named Queen (sorry, I haven't a clue). Yoder arranged "Mucho and "Day, Hirsch "Bohemian Rhapsody. While Hirsch and Yoder are the main soloists, there are amiable turns by the aforementioned McDonald, alto Matt Donovan, tenor Georgios Giannos, baritone Erik McDonough, trombonists Jay Vonada and Paul Leskowicz, pianist Billy Test and drummer Aaron Kimmel (most prominent on "Sing Sang Sung ).

Okay, the concert doesn't exactly get off to a breathtaking start with the largely pensive "Village Green suite, and there's nothing elsewhere that's liable to knock anyone for a loop. On the other hand, it's an earnest performance by seventeen part-time musicians who are giving it everything they have. Their little corner of the world is exceedingly blessed to have them there.