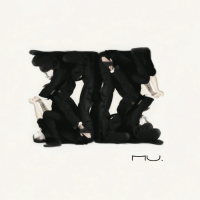 The Greek letter mu is used in physics notation to represent the coefficient of friction—and accordingly, this wacky and brainy crew could have hardly chosen a more relatable handle. The name seems to conflict with inventor Nikola Tesla's famous concept of free (i.e. all-natural) energy, but the clash is pretty apt for Free Energy!, which revels in such craziness. The friction they create comes from wildly mashing up a few stylistic elements that aren't always known for compatibility—in large part it's a mix of jazz-rock fusion, avant-garde weirdness and '80s Britpop. You can't always dance or trip out to it, but free and (almost always) full of energy it certainly is.

This Polish quintet bases the album around song forms, often with actual verses and choruses, but they're also willing to interrupt them with off-the-wall noise, and name one rambly fusion piece after Eric Dolphy. The lyrics lean to the offbeat rather than catchily lodging like earworms, while the cocoon of overall ambience can still feel like a comfortably familiar blanket of retro psychedelia. "Rain & Shine" offers a dose of sunny flower-child psych-pop with light electronic underpinnings. "Aeolian Cadences" adds some squawking saxophone for a light dash of jazzy punk; the thematic "One for Tesla" illustrates its electricity theme with a juiced-up freakout worthy of Frank Zappa. There are also a couple spots that get straightforward and even pretty. At those moments, lines like "gaining momentum / we'll soon hit the ground" come out sounding almost comforting.

The more extended set piece, "The Story of Techno," illustrates their mad case of compositional ADHD the most, bouncing from indie-ish ballad to airy electronic fugue to careening sax solo to hand-clapping '80s-style singalong—all followed by the soundtrack to some druggy sci-fi fever dream, just in case the whole thing hadn't gotten weird enough. Abrasive as Free Energy! occasionally gets, it never loses its streak of playfulness. That probably won't be enough to win over any listeners put off by the the bizarre factor, but it certainly helps a lot for those who don't mind. If you're going to frighten the neighbors, you might as well have some fun at it.