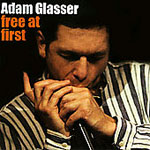 Of all the harmonica players who have followed in the footsteps of legendary harmonicist Jean "Toots" Thielemans' wizardry, Adam Glasser may be the only proponent of this instrument—so little used that it only features in the "Miscellaneous" instruments lexicon of jazz discography and literature—who has brought a truly unique voice and idiom to the constantly evolving language of jazz. Stevie Wonder, Gregoire Maret and Hendrick Meurkens are all virtuosi non-pareil. Glasser does something more.

On Free at First—his debut record as leader—Glasser has opened up the whole South African music scene to the world, evincing the excitement of its music, from mbqanga jazz to the sophisticated contemporary sonic expeditions that began with Dudu Pukwane and Chris McGregor and continued through the music of Abdullah Ibrahim, Hugh Masekela and the late Bheki Mseleku. The line joining all of these musicians is blurred and curvilinear, but it certainly now draws Adam Glasser into that sanctum sanctorum.

Adam Glasser is a sublime virtuoso yet different from all of his peers. His is a unique artistry born of a magic that combines the voice with each breath that shapes the very syllables that make up the wordless phrases, metaphors and idioms forming the lines and circles in his music. Thus Glasser appears to breathe melodiously and sing through his chromatic harmonica. And his breath and phrasing are exquisite and perfect, much in the way Satchmo's was whether he sang or played his horn. "Tourmalet," "How Deep is the Ocean" and "On Green Dolphin Street" are perfect examples of how Glasser can make music out of mouthfuls of air.

"The Low Six" sees Glasser joined by South African griot and poet, David Serame, to tell a powerful, moving story of the damnation of apartheid in South Africa. The two artists return later to send the spirits soaring with Serame's recalling of a jazz tour of concert halls in "African Jazz and Variety." Very wistful and utterly unforgettable. Another fascinatingly colored vocal track is "Mjo," with the beautiful tones of singer Pinese Saul. This is rousing and absolutely South African rhythm, as is the treatment of Jackie McLean's "Little Melonae," with a scat vocal by British vocalist, Anita Wardell. To the South African palette of sound, Glasser adds his own composition, "Kort Street," an infectious township dance-inflected track that holds up very well with the classic Ciaphas Semenya chart, "Part of a Whole".

The album "chokes" (in Platonic wonder) "with gold." Monk's "I Mean You" gives an all too rare showcase for the song, with Glasser channeling not only Charlie Rouse's tenor saxophone, but also Monk's angularity on his chromatic harmonica. And before there's a chance to catch a sense of balance from the dazzling experience, comes the breathtaking close: a tribute to Joe Zawinul, with the hauntingly beautiful "Remembrance." Free at First will be a challenge to equal for sheer scope of virtuosity, musicality and surprise.

Tourmalet; How Deep is the Ocean?; On Green Dolphin Street; The Low Six; Mjo; Quickly in Love; Kort Street; Maos de Afeto; African Jazz and Variety; Little Melonae; I Mean You; Part of a Whole; Remembrance.