Freddy Cole: Cole and Laid Back

By ERNEST BARTELDES
December 1, 2007
Sign in to view read count

For Music Maestro Please (High Note, 2007), his seventeenth releases since I'm Not My Brother, I'm Me (High Note, 1990), singer/pianist Freddy Cole teamed with pianist Bill Charlap and his trio, featuring bassist Peter Washington and drummer Kenny Washington. The album features songs that, for the most part, the Georgia Music Hall of Famer (he was inducted in 2007 as a music pioneer—"the first time for a jazz performer," he comments—in a ceremony that also nominated rapper/actor Usher and rock band Lynyrd Skynyrd) has never done before, even in a live format.

"Bill and I had worked together before, we played at [Manhattan's] 92nd Street Y, and had a week's residence at The Rose Hall with his mom (singer Sandy Stewart)," Cole said during an early morning phone call from his home in Atlanta, before he headed off to his local golf course. "One night he was playing with his trio at Dizzy's Club Coca-Cola, and he saw me in the audience and invited me to do a song, and then that was when the idea of recording a disc was hatched.

Cole said that from then on the process was quite effortless. "We chose the songs, Bill would make suggestions, and we came up with the repertoire," he recalls. "It was [executive producer] Joe Fields who later came up with the title Music Maestro Please."

Though most of the material on the disc consisted of tunes he had never "touched" before, Cole said that the sessions, which took place over two days in the spring of 2006 at The Van Gelder Studio in Englewood, New Jersey, were quite simple. "The only song I had done before was 'Once in a While,' and as for the other tunes—'You Could Hear a Pin Drop' and 'I've Never Been The Same'—it was fun to get to know the other tunes." 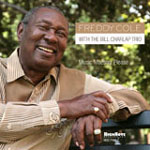 "The sessions were great, it was very easy," he recalls. "Bill is very laidback, and there were a lot of laughs during the recording." Responding to a comment on the disc's overall live feel, he noted that it was pretty much how it happened "Most of the songs were done in one or two takes; it was almost like a live performance."

Bill Charlap is "an excellent musician, and he knows how to listen," Cole states, adding that he performed at the Charlap's recent wedding, was very pleased at the results and also by the feedback he's been getting from fans and fellow musicians.

"Everybody loved it, and so did I," Cole says. "I don't often go back and listen to a record after I've finished it, but I was hearing it during Bill's wedding and thought the sound was so great—Peter Washington really hit some great notes in some of the tunes.

When asked about touring with Charlap's trio or other future plans, he says that there is nothing scheduled right now. "The disc just came out, and I haven't thought about any follow-up plans. I will continue to do my thing for now, and maybe we'll be able to do something together later on.