Just let the music play, and you'll get it. The message will come through, because, it's just that powerful.

At the second annual Jazz Journalists Association award show at the Jazz Bakery, West Coast Edition, a small dapper man sits watching in the back. After an energy bath by the Vinny Golia Quintet, he strolls to the stage and without waiting for an introduction, Blue Note legend Freddie Redd beams a radiant smile beneath a stylish fedora, leading his trio of Nedra Wheeler and Bill Madison through joyous jazz scripture from the church of bebop. Their irresistibly elegant swing quickens the spirit of all in attendance, moving LA wind player Joshua Spiegelman to lead the testifying with claps whoops and hollers. "Man, this is great," he enthuses, "this is the kind of music that made me decide to play jazz."

Asked if he was aware of the electrified crowd reaction, Redd says, "Don't think I'm deaf to applause, they were making me feel good. That's what this music does. When you can get to the point where you can do what you do unencumbered that will always come forth in some way or another. And that's really the deal to me, what happens naturally to me is going to happen naturally to anybody who's listening." Not a bad way to spend your 77th birthday.

For Redd, the piano wove into his destiny early. His father taught piano, and although the elder Redd died during Freddie's infancy, his presence remains. Redd dabbled and learned a little boogie, but he didn't catch the fever until an army buddy played Parker and Gillespie's '"Shaw' Nuff" for him while stationed in Korea.

"Just blew me away," he recalled.'It just spoke to me so strongly. From that moment on I started haunting the piano in the day room. I was there most of the time. I met a few other enthusiasts of bebop, which had just come in very strong. That's where I decided I would become a musician, a jazz musician at that."

Back in New York, Freddie threw himself into his bebop vocation, quickly landing a gig with frequent collaborator, Tina Brooks. 'Tina was just a young dynamo. That was Tina, he always kept turning it out. I met him when he was very young and I took him up to Syracuse, my first gig, actually. I was with a drummer named Donnie Mills, somehow it ended up being my gig. That's where I first met Philly Jo Jones, he's was working a block away. Ray Bryant, Nelson Boyd, it was just a fun time. Tina was always my first choice, whenever I had a gig like that I'd get him."

Redd worked hard woodshedding at Birdland's Monday night sessions, gigging around Harlem, playing with Cootie Williams, Art Blakey, Tiny Grimes, Gene Ammons, Art Farmer, and Charles Mingus, among others. 'Charles was quite a character," he recalled. 'You had to know how to handle him to really make things work. You had to know what made him tick. He was such a perfectionist. The next second he'd hear something better than what we'd just rehearsed for an hour and he'd change it right then. He was an interesting guy, we had our ups and downs. I still admire him a lot."

A favorite employer was Coleman Hawkins. "The love of my life, Coleman Hawkins. Everytime I got a call from him I felt so honored, that actually he'd call. I shared a wonderful moment with him. I was coming from Westport, Conneticut. Bean always had (we called him Bean) these great jobs, he always paid good and you never overworked. And we were coming from a gig in Westport, and he said, 'Do you want to go to Birdland?,' and I said, 'yeah.' As we were approaching the club, standing in front of the club was Illinois Jacquet. He said, 'Hey Freddie, do you know Illinois?' I said, 'no.' He said, 'Hey this is my pianist Freddie Redd and he plays the expletive starting with s out of Startdust. Startled me, you know? That I got that kind of compliment. And these were the kind of people that guided me." 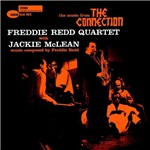 A friend brought Redd a script about the ravages of heroin addiction, and after meeting author Jack Gelber, he accepted the gig that would define him. Redd's score for The Connection attracted the attention of Alfred Lyon and Francis Wolf who brought the pianist composer to Blue Note for three sessions. Working at the legendary studio in its halcyon days, Redd said the historical import never entered their minds. "Making history? We were young. We were looking at the future-anything that was coming up. Only in retrospect you look back and say, 'oh, that's what that was,' or 'that's what they did.' It was sure nice to be a part of it, as well as to hear it, and do it, a grand endeavor."

After stints in San Francisco and Europe, Redd settled in Los Angeles in 1974, and while he has remained active, he's not as active as he'd like to be. "Phone doesn't ring, I guess a lot of people don't know where I am. Then again, there used to be places where one could hang out for a couple hours and find out everything that's going on in town, but that's a network no longer intact. I don't think we have very good communication among jazz artists." 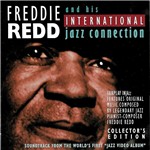 That could change with the scheduled reissue of The Connection. With his recently recorded hard swinging International Connection CD available from his website, www.freddieredd.com, and a high powered Bebop Live show coming in August, Redd makes a strong transition into the 21st Century. "I'm getting ready to do a concert a Barnsdale Park for Rocco, I'm going to have septet that night, August 5th. It's free concert, Union Trust money gig. But, I've got some dynamite artists: Herman Riley, Phil Ranelin, Sal Marquez, Zane Musa, Herb Nickman on bass and Clarence Dawson on drums. We're going to have a lot fun that night. Calling it Bebop Live. You put that kind of dynamic together and it generates something special. It's not anything you can really speak about, it just needs to be in place. Oh, it's going to be a hot night, spontaneous combustion. We're going to be doing bebop classics and some of my things. So, we'll really get the bebop message out. That music is really very special. When you put those kinds of spirits together, that energy, you can't buy that."

"We as musicians, if we're into our music we want it to relate. And they don't have to understand anything, we're not trying to get them to think about jazz, think about bebop. Just let the music play, and you'll get it. The message will come through, because it's just that powerful. It really got me on the right track. I'm really a blessed musician. especially in bebop influenced by Charlie Parker, Bud Powell, Monk, coming from a time where I could go and hang out and learn from them. Oh, my God, what an incredible time. I can remember all the really beautiful moments, and one day I think I'm going to pen them."