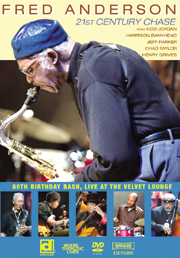 Saxophonist Fred Anderson turned 80 on March 22, 2009 and celebrated the occasion with a concert at The Velvet Lounge in Chicago. He called in fellow tenor player Kidd Jordan, bassist/cellist Harrison Bankhead, guitarist Jeff Parker and drummer Chad Taylor to join him. What transpired was a hot, steamy barrage of music, ignited by two senior citizens of improvised music, which has been released on DVD and CD.

Jordan, who was 74 at the time, is the progenitor, playing with rapid fire intensity while riding the upper register. He is as challenging as can be, forging ahead on quicksilver changes and hardy phrases. Age has not withered his power.

Anderson is the perfect complement, content to play in the lower register, being a companion and a foil at the same time. It is this understanding between the two that takes the music away from any notion of a "cutting contest" and imbues it with stunning majesty.

As Anderson reveals in his commentary, the music was largely spontaneous. "21st Century Chase Pt. 1" pays homage to that as the band get into several styles. Bop mutates into free jazz, tension and release make perfect bedfellows, and the progression is filled with invention and surprise right through.

"Gone But Not Forgotten" is a DVD bonus track. Henry Grimes steps in to play bass and he shows just how integral a cog he is in improvised music. His ripe ideas and robust but rhythmic playing are impeccable as he sets up the pulse for the band. As always, Anderson and Jordan are twin engines of harmony. Bankhead scores with his odd time signatures, and Taylor adds a deliciously supple beat to the high octane performance.

Anderson's commentary is full of anecdotes. He reminisces on how he and Jordan met, about them playing together, his collaborations with Bankhead and Parker, and how the title "21st Century Chase" came about.

The DVD is a companion to the CD. The former entrances with its visual aspect: the viewer is witness not only to an historic evening, but to one that was highly entertaining as well.