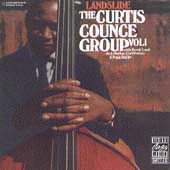 "Man, I feel like cookin' this evening,"* Frank Butler proclaimed while setting up his drums in the Contemporary Records studio on October 6, 1956. Over a half-century later, his words still have the ring of absolute truth. The session, led by bassist Curtis Counce and released in 1957 as Landslide, was an incandescent beginning to Butler's recording career. The California-based trapster had previously amassed an impressive resume, including gigs with Dave Brubeck's combo and the big bands of Duke Ellington and Edgar Hayes. Throughout the record's six tracks, Butler is positively inspired, holding the band together in tandem with Counce's rock solid bass lines, and goading the three primary soloists with a seemingly endless array of percussive gambits.

A balance of regularity and constant change is the hallmark of Butler's style of jazz drumming. Acutely aware of every stroke's impact on the band, he's a master of time, rhythm, shading, and nuance. By today's rock-influenced standards, his drums sound rather small. But because they're impeccably tuned and each drum speaks clearly, he makes you acutely aware of the differences between his snare, tom-toms, and bass drum.

There's nothing tentative about Butler's approach to the music. In listening to Landslide, you get the sense of a restless mind, constantly weighing options and engaged in a dialectic between restraint and assertiveness. A light but firm sounding ride cymbal provides stability and moves things forward. The comping behind soloists with the snare and bass drums follows no predictable pattern. There's no anticipating where he'll go from one bar to the next. Butler freely moves from commenting on the soloist's progress, to bolstering the chords of pianist Carl Perkins, to an occasional independent thought. Acrobatic fills are sometimes jammed into the space of a few beats, without any awkwardness or loss of continuity. All in all, his drumming is cooperative, disciplined, and very exciting.

Butler puts his right foot into the head of the title track. Though the snare and hi-hat cymbals too have a prominent role, it's the boot of the bass drum that drives things forward; catching key points of tenor saxophonist Harold Land's composition along with Counce's bass and Perkins's piano. As Land's solo commences, the lightness of the ride cymbal and Counce's walking line almost comes as a shock.

During solos by Land and trumpeter Jack Sheldon, Butler isn't lacking opportunities to fill in empty space; yet because he usually exercises restraint, the few instances of cutting loose are all the more meaningful. Generally speaking, time is played and order is maintained. The basic relaxed pulse never wavers—as always, the ride cymbal sees to it. His transgressions—accents and fills—never impose any change of direction. He combines precision, an incredible sense of timing, and a bit of daredevilry. If Butler were any busier, the music would be overloaded. Instead, it's electric with energy.

A couple of highlights include an instance in which he zeros in on one of Land's phrases and executes leaping pairs of strokes that makes the music swell a little. Just as Sheldon is finishing a thought, Butler's quarter note triplets to the snare and mounted tom-tom are a simple, swinging, and somewhat brazen way of asserting himself before the trumpeter moves on. Later on he jams a rapid, running on ice pattern to the snare; but, as always, the timing is impeccable and the burst ends without interrupting Sheldon.

Butler's accompaniment to the soloists on "Sonar" seems to be simultaneously directed at every instrument in the band. You can be lulled by the regular sweep of his brushes behind Perkins's solo; then, there are the jolts provided by the bass drum. They are at just the right volume, and provide just enough weight. Appearing in different guises the bass drum accents never really shake things up; yet they don't leave the music feeling entirely settled. The drummer's knack for asserting himself without overdoing it is exemplified by a sequence in Sheldon's solo. He follows a chain of Perkins's off of the beat chordal sequences by playing the bass drum in approximate unison, four or five times, and then cuts it off even as the pianist continues. You feel the pattern but it's gone before completely registering in your consciousness. Butler completes the thought by making five terse brush snaps that are outside of his normal steady pattern.

During an up-tempo take on Carl Perkins's tune, "Mia," Butler responds to everything that goes on around him. It can't be easy to work around the pianist's barbed, insistent chording, yet Butler does it with ease. Behind Sheldon's two chorus solo, snare drum accents snap, crackle, and pop at irregular intervals. He constantly changes the placement, dynamic level, and emphasis. Butler also executes a number of brief fills which are clever, propulsive, as well as varying in character and texture. A single hit to a tom-tom is completed by a few strokes to the snare. An explosion of wildly snapping snare whacks makes an impact and disappears into straight time. Quarter note triplet smacks to the snare sound like an insistent knock at the door.

"Sarah," a slow blues written by Sheldon, is the site of some of Butler's most creative work. In contrast to "Sonar," in which the bass drum plays off of the brushwork, during Perkins's solo just the steady whisper and sweep of Butler's brushes gently moves things along. Switching to sticks at the onset of Land's four chorus improvisation, the ride cymbal patiently delineates a steady pulse and eccentricities are integrated into the straightforward timekeeping. After the second bar of the solo, a brief closed roll resembles the hiss of an air brake. Several measures later a pair of snare hits sound like pistol shots. As Land's third chorus begins, the ride cymbal stays in place and, following Perkins's lead, Butler creates the illusion of double time by clapping the hi-hat on the "and" of each beat. On the last two bars he fashions a long phrase by spreading out remarks to the snare, tom-tom, and some rim knocks, briefly pausing after each parceled segment.

* The quote is from Lester Koenig's liner notes to Landslide.