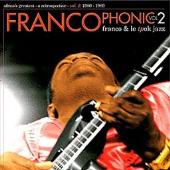 The Congolese guitarist, singer, bandleader and composer Francois Luambo Makiadi—most commonly known as Franco but with a raft of other nicknames including The Grand Master and The Sorcerer of The Guitar—had by the time of his death in 1989 dominated the elegant but gutsy genre of Congolese rumba for over two decades. Born in 1938, he had been the biggest African music phenomenon of his age.

During his lifetime, Franco had a pan-African following still not surpassed by any other artist. Uncounted millions of people in Central, East and West Africa had followed the music he made with his band OK Jazz (sometimes called TPOK Jazz, the TP standing for "tout puissant" or "all conquering"), and he left behind a discography of around 150 albums, along with several hundred singles released in the 1950s and 1960s. And yet, while he was alive, Franco went largely uncelebrated outside Africa, his music peaking just a few years too early for the "world music" movement which grew legs towards the end of the 1980s. He remains an unjustifiably marginal figure among African music enthusiasts outside the continent even in 2009.

It's this imbalance between Franco's importance within Africa and his profile beyond it which Sterns Records is seeking to redress with two 2-CD collections of his music. Francophonic: Africa's Greatest: A Retrospective: Vol.1: 1953 - 1980, released in January 2009, has been joined in October 2009 by Francophonic 2, which takes the story up to Franco's death. Each comes with a scholarly 48-page booklet researched and written by Ken Braun, Sterns' resident Franco authority, which relates his colorful and eventful career and provides social and musical contexts for each track. Even over four discs, it's possible, of course, only to scratch the surface of Franco's legacy. But Braun's selection is peerless, and makes a perfect introduction for anyone wishing to dip their toes in the water.

Franco didn't "invent" Congolese rumba. That distinction is generally credited to Joseph Kabasele (aka Le Grand Kalle), who in 1953 formed the country's first modern rumba orchestra, African Jazz. Kabasele codified the re-Africanisation of the Cuban dance music styles which had been brought to the country, on 78rpm records traded by sailors, in the 1930s.

Franco injected a deeper, more traditionally-rooted, Congolese groove into Kabasele's style, and his gutsy, reiterative guitar playing resonated strongly with the country's percussive likembe (thumb piano) music. Equally tellingly, he wrote folkloric songs whose lyrics gave voice to the mass of people outside the relatively prosperous middle class created by the Belgian colonialists to conduct the day-to-day administration of the country. By the mid 1960s, after the country's independence, Franco and OK Jazz were on their way to defining Congolese rumba. Their closest rivals were bands led by the singer Tabu Ley (aka Seigneur Rochereau) and the guitarist Nico Kasanda (aka Dr Nico), both of whom played "sweeter" styles than Franco and who found particular favor among the "evolues" (the "civilised ones," as the Belgians had called the Congolese clerical class).

Originally a ten-piece, OK Jazz had doubled in size by the mid 1960s, and grew larger still in the 1970s—a gloriously rich, going on rococo, but superbly well disciplined body of singers, dancers, guitarists, traditional percussionists and reed and brass players. By the early 1980s, when Franco began to split his time between bases in Belgium and Zaire, there were two OK Jazz line-ups: one recording with Franco in Brussels, the other performing in his lavish, three story Un-Deux-Trois club Kinshasa under the leadership of Simaro, a guitarist with the band since the early 1960s.

Francophonic 2 catches Franco and OK Jazz at the very peak of their powers, a peak approached on the second disc of the first set, and runs with it to the wire. Like its predecessor, it's essential listening for anyone who has yet to catch the Congolese rumba bug.