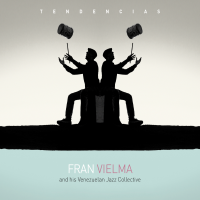 Continuing the long, fruitful history of jazz's intermingling with Afro-Caribbean music, percussionist Fran Vielma brings his considerable talents to bear in offering a distinctive melding of jazz with Latin forms—but with a special focus on his native Venezuela. Joined by some outstanding instrumentalists, such as trumpeter Mike Rodriguez and alto saxophonist Miguel Zenon, Vielma sketches a rich, multifaceted and deeply enjoyable musical world.

This is Vielma's first recording date as a leader, but one wouldn't know it by considering the sophistication and subtlety of his compositions, or the way he utilizes the members of his band in breathing life into them. Pieces like the opener, "Monk en Aragua," have an irresistible energy, animated both by Vielma's tambor cumaco and the inspired horn arrangements that keep the music moving. And Vielma's not afraid to throw a few curveballs; giving bassist Roberto Koch the first solo on the disc is certainly one of them. But it's a superb one, and it's followed by equally bold statements from pianist Luis Perdomo and Zenón, both of whom provide plenty of fireworks throughout the disc. And when Vielma gets a chance to strut his stuff with his own rousing solo toward the close of the track, the intensity is heightened even further.

Vielma's liner notes are invaluable, as they point to the care he devoted to drawing deeply from the many rhythmic traditions found in Venezuela. Close listeners will appreciate the subtle differences that emerge on the various cuts, often colored by Vielma's extensive collection of percussion instruments. A piece like "Cereal de Bobures" takes on a much less assertive character than the album's opener, with a more easygoing, swaying rhythm stemming from the piece's gaita de tambora origins. And the record's title track takes us into the Central/Eastern coastal regions of Venezuela, where the relentless motion of the sangueo fuels the music's ebullience.

But it's not just the rhythmic potency of Venezuelan music that stands out here; indeed, on a number of the tracks it's Vielma's indebtedness to the wider jazz tradition that is striking. A piece like "Hubbardengue," dedicated to Freddie Hubbard, highlights Perdomo's work on the Fender Rhodes for a slice of modal jazz that retains a hint of Latin flavor, but without over-emphasizing it. And a lot of the voicings for the horns are influenced by modern jazz concepts, as one can hear on "Minanguero," where the complexity of the harmony contrasts nicely with the spry tambor mina rhythm at its core.

At well over an hour of music, there's a lot to savor in Vielma's enticing stew of musical styles and influences. Fans of Latin jazz, and creative jazz in general, will find a lot to like on this promising debut disc.