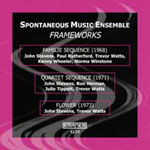 All of the freely improvised music collected here is previously unissued and, to the best of my knowledge, only the duo of percussionist John Stevens and reed player Trevor Watts has been extensively documented on record before now, notably on Face To Face (Emanem, 1973). The duo is featured on "Flower here. The piece was recorded in the same period as the music on Face to Face and it's in the same austere and minimal vein.

The thirty minutes plus of "Familie Sequence is, however, another matter entirely. Part of its duration is an example of the "Sustained Piece a nominal method devised by Stevens to give musicians a feel for free playing. The voice and instruments, with the exception of Stevens, are deployed in a manner that gives rise to a meditative air, permeated however by an underlying sense of unease. In particular singer Norma Winstone offers an intimation of just how compelling she can be in a setting in which she has recorded far too infrequently, and Kenny Wheeler on flugelhorn proves just how broad his scope has been over the course of his career.

Speaking generally, the result is music for which precedents at the time were few. Of those, perhaps, the early work of reedman Roscoe Mitchell is more than a tenuous point of reference, although the respective uses of space and near silence are of quite different orders, as is the absence here of Mitchell's formalism.

The influence of Albert Ayler is felt on "Quartet Sequence, and not just in terms of how pronounced it is. Watts on soprano sax deploys a measure of vibrato that has otherwise been anything but emblematic of his work on the straight horn. Ron Herman's bass playing is nothing short of extraordinary, its combination of seemingly hyperactivity balanced by a concurrent sharpness of response to the group's demands, one of which is Julie Tippett's voice. Her work is that of a woman who, at the time, had resolutely turned her back on stardom—she had a hit with keyboardist Brian Auger on a version of Bob Dylan's "This Wheel's On Fire less than five years before making this music---in favor of something more fulfilling.

Perhaps as much a piece of social history as anything else, this music comes at us as evidence of just how much ground was covered in that fertile decade and a half between 1965 and 1980. As such, one of its lasting impressions is that of music made so far in the moment as to be eternally compelling.