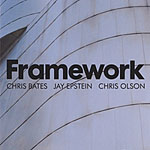 Framework is a well-written and engaging modern jazz album featuring the Minneapolis based trio of bassist Chris Bates, drummer Jay Epstein and guitarist Chris Olson. The tunes on the album are a collection of original compositions written by the members of the trio as well as two Wayne Shorter tunes and the scarcely performed, but definitely deserving more attention, "Camino de las Tropas" by Carlos Moscardini. Every tune is creatively arranged in a manner that allows each member of the trio to insert their own unique voice into the pieces, while still maintaining a strong sense of ensemble throughout.

Each member of the trio is at the top of their games on every melody and solo throughout the album. As the lead instrument, Olsen steps up to the plate and delivers during every melodic interpretation, comping section and improvised solo. His work on Shorter's "Valse Triste" successfully walks the fine line of homage and imitation as he weaves his way through a solo that is at the same time a tribute to the great saxophonist and a personal statement on the tune itself. The rhythm section of Bates and Epstein are also in fine form as both accompanists and soloists. The time and feel is steady on every track and both musicians play with big ears that allow them to catch the rhythmic cues thrown at them by Olson, which only adds to the success of the ensemble. Bates' solo introduction to the tune "Solid/Liquid" is one of the highlights of the album. Channeling lines and phrases from the likes of Dave Holland and Eddie Gomez, Bates releases a barrage of exceptional runs that are the perfect lead-in to the dirge-like melody section of the piece.

One of the most unique aspects of the album is that is was recorded by the students of Chopper Black at the McNally Smith College of Music. The fact that McNally has students that can produce an album that is professional in both its sound and mix is a testament to the level of teaching and mentorship these students are receiving at the College. Every note on the guitar rings through crisp and clear, the mix of the drums is dead on and the bass is full yet never boomy. If the trio had not written this fact in the liner notes it would be impossible to tell that this recording was not made by experienced studio professionals.

Framework is a strong release for the trio of Epstein, Bates and Olson. The tunes are melodic and harmonically interesting, the solos are energetic and the ensemble interacts on the highest level. All of which come together to produce an album that is as entertaining as it is intellectually stimulating.