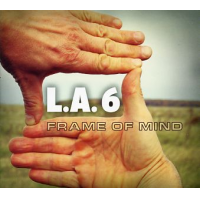 Once upon a time ('way back in the 1970s-80s) there was the peerless L.A. Four (Bud Shank, Laurindo Almeida, Ray Brown, Shelly Manne) and now we have the L.A. Six, another hard-swinging post-bop ensemble that has chosen to walk in some rather large shoes by recording a splendid debut album, Frame of Mind. With Tom Peterson assuming Shank's role as lead saxophonist, the front line has been expanded to include trumpeter Clay Jenkins and trombonist Ira Nepus, ably supported by a top-rank rhythm section (pianist Rich Eames, bassist Jeff D'Angelo, drummer Dick Weller).

L.A. of course is unmistakably Los Angeles, and the musicians who comprise the L.A. Six are among the best that area of the country has to offer, earnest successors to such giants as Art Pepper, Shorty Rogers, Gerry Mulligan, Bob Cooper, Frank Rosolino, Stan Getz, Chet Baker, Claude Williamson, Jimmy Giuffre, Lou Levy, Conte Candoli, Bill Holman, Chico Hamilton, Russ Freeman and the many other pioneers of West Coast jazz, not to mention the members of the seminal L.A. Four. While the rapport and musicianship of the Six is impressive, the charts (five written by Eames, four by Peterson, one each by Jenkins and Weller) are no less so, bringing out the best in four standards, two originals by Eames ("Sight Seen at Twilight," "The Elms") and others by Jenkins, Weller, Sonny Stitt, Steve Strazzeri and Oliver Nelson.

Any group that opens with Stitt's chops-twisting "Eternal Triangle" surely means business, and the Six readily earn their spurs on that one before moving on to Eames' "Twilight," Weller's "Wonder Where You Are" and Mack Gordon / Harry Warren's winsome standard, "I Wish I Knew," taken at a brisker pace than usual in Eames' charming arrangement. Jenkins wrote the ballad "Love Is Kind," which precedes Burton Lane / Ralph Freed's "How About You" and Eames' "The Elms." "You're My Thrill," once marvelously played by one of Manne's sextets, is followed by Strazzeri's lyrical "Frame of Mind," Leo Robin / Ralph Rainger's "If I Should Lose You" and Nelson's bluesy finale, "Yearnin.'"

The ensemble, as noted, is close-knit, the soloists bracing and resourceful within their normal comfort zone. It's especially gratifying to hear Jenkins in a straight-ahead format (dig his ardent solo on "How About You"). As drummer Peter Erskine notes in a brief commentary: "Tom Peterson has put together a collection of music and musicians that refreshingly recalls the best of West Coast jazz while pointing toward future horizons. Bravo." Well said, Peter.

The Eternal Triangle; Sight Seen at Twilight; Wonder Where You Are; I Wish I Knew; Love Is Kind; How About You; The Elms; You’re My Thrill; Frame of Mind; If I Should Lose You; Yearnin’.