By DEREK TAYLOR
November 24, 2005
Sign in to view read count 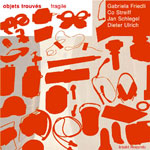 On the surface, the instrumentation of the Swiss quartet Objets Trouvés appears to follow the conventional schematic of a saxophonist backed by a piano-led rhythm section. The group's music, made up of ambitious sectional suites governed largely by collective improvisation, proves conclusively otherwise. Pianist Gabriela Friedli provides the composed material that serves as periodic thematic signposts, but it's up to the band as a whole to determine its minute-by-minute trajectory on the fly.

The meterical ingenuity of drummer Dieter Ulrich and the harmonic facility of electric bassist Jan Schlegel are integral to these transitions. Irregular time signatures abound, and it's largely up to this pair to preserve the group's well-greased equilibrium during each shift of the gears. Schlegel's amplified strings diminish their tonal clarity to a minor degree, but the tradeoff comes with a bulbous breadth and buoyancy that adds delicious girth to the more groove-oriented segments of the program.

True to the standard roles of their instruments, Co Strief and Gabriela Friedli serve as the quartet's melodic principals. But that's not to suggest that their contributions follow predictable tracts. Strief's tone on both straight and curved horn emphasizes an aerated dryness, more in common with the inflections of Konitz or Desmond than the shrill coarseness associated with many freer players. Friedli's allegiances are also attuned to the more mellifluous end of the spectrum, though both players can kick up quite a tempest when the mood suits them, as on the friendly fracas that dominates much of "Avra-Vellum. Strief even hints at a subtle Evan Parker influence during a circular breathing workout on the closing "Lucullus-Ursa Maj in league with Schlegel's pitch-bending bass.

Plenty of opportunities arise over the four lengthy tracks for the four players to parse off into fertile subgroups. The opener "Pugglig commences with a loping drums, bass, and alto vamp and segues into a full quartet romp. Toward the close, it's Strief's Lacy-style straight horn in brief tandem with Ulrich's gently thwacking brushes. "Kulan rolls out on a vaguely North African rhythm, Ulrich's brushes signaling a supple syncopated beat and Schlegel plugging the gaps with a pudgy percolating bass line. Streif's horn floats above as Friedli sculpts grand, effulgent chords that segue into the slowly smoldering ruminations of "No Way Out. Dense, swirling variations on the "Kulan motif supply slippery resolution.

Other segments pair Strief's soprano with Schlegel's febrile bass or Friedli's keys with the clip-clop rhythms of Ulrich to fine effect. In all cases the players approach their unions with an abiding appreciation of how their interplay fits into the umbrella whole. At just under an hour in length, the set goes by surprisingly fast. The more melodic and disciplined leanings of the quartet may not appeal as much to listeners who like their free jazz consistently stentorian and aggressive, but those with ears open to more tempered and elegant forms will uncover much to enjoy here.