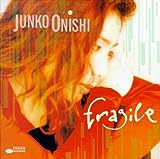 Combining a variety of keyboard models and styles with a number of percussionists and grooved electric bass, the quickly-recorded Fragile is ironically quite pliable and coarse at times, wielding an oft-unwieldy arsenal of moods and sounds which occasionally (and admittedly) lose their sense of form and function. Though "Complexions" was wrapped after just one take, it is perhaps the most "standard" and clean track of the seven. On the contrary, "BWV" is a wild and at times bangy keyboard and rhythm set which introduces the album uncertainly. Having never heard The Righteous Brothers’ version, Onishi opts to work her ivories through a long and vaguely-themed rendition of the Roberta Flack/Danny Hathaway version of "You’ve Lost That Lovin’ Feelin." Though Onishi’s saloony meta-cover of Jimi Hendrix’s signature "Hey Joe" sounds much more familiar, a hyperactive percussion and spinning keyboard change disrupts the near sacred sly serenity of the song.

Fortunately, Onishi’s tributes reestablish their authenticity through her vocoder-y version of Cream’s "Sunshine Of Your Love" and a peppy pounce on Les McCann’s "Compared To What." She also takes another stab at her own popular composition with the classically-structured "swing" number "Eulogia Variation." Even so, despite the notable fulfillment of her desire for freshness and energy, Onishi could have "played" a little less and considered her latest offerings a little more before laying them down.