By MARK CORROTO
September 24, 2009
Sign in to view read count 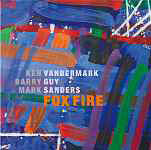 The audience has been removed from these live concerts, recorded in 2008 in Birmingham and Leeds, featuring American reedman Ken Vandermark alongside British drummer Mark Sanders and bassist Barry Guy. Despite the constraints of a short, five-day UK tour of only six concerts, there's much to savor in the resulting two discs, for connoisseurs of creative music.

Granted, there is no such thing as a "perfect" freely improvised recording. Listening to a recording is different from attending the recording event, studio or live—the result of mastering and engineering being further impacted by the playback system at hand, whether it's an iPod or $10,000 home audio system.

All three musicians are adept at instant music making. Guy, the elder statesman, is a classically trained bassist who maintains a presence in both the improvised and compositional worlds. His partners have made their respective marks—Sanders, with the likes of Evan Parker, Jah Wobble, John Edwards and Paul Dunmall; Vandermark having built a reputation with his own Chicago groups Vandermark 5, Sound In Action Trio and the Frame Quartet. The reedman has also collaborated with European improvisers in countless ensembles.

The proof here is the instantaneous manner in which the trio gets down to the business of music-making. This isn't just twiddling and tinkering with instruments; the three, in the classic sax/bass/drums configuration, narrate paths of sound governed by an unwritten set of rules. Sure, there are Herculean displays of power, such as the tortured passages of "Fuggle" and "Northern Lights," where the players seem to loosen their regard for understatement and ply the power. But overall, the presentation here is more for tension than noise. Sanders keeps an even-handed application of energy distribution, opting for speed over cacophony.

The true gems on Fox Fire are the quieter pieces that almost slip by, like "Revontulet," with the twinkling of Guy's notes against Vandermark's hesitant clarinet. With Sanders' shuffling brushes, the band builds a narrative with unhurried confidence. Paused for brief solos, it's an easy walk through the portal of imagination.