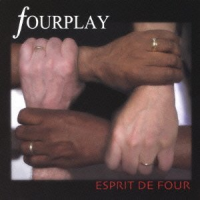 Bands don't last over two decades with minimal turnover in personnel and continued success if they're composed of egotists, prima donnas, drama queens or people that just don't play nice together. Fourplay has endured and thrived because it is an egalitarian coalition of seasoned professionals who set aside private agendas to serve the group dynamic.

When a new guitarist joins Fourplay it typically takes their sophomore recording with the long-running band before they truly begin to fit in. In over 20 years there have been only three personnel changes, with original guitarist Lee Ritenour being replaced by Larry Carlton, who manned the spot for 12 years and seven albums, until he exited and Chuck Loeb became the "new guy" on Let's Touch the Sky (Heads Up, 2010).

Stability has been a strength for this assemblage of veteran musicians even if consistency has led the band to be dismissed by critics little more than slick, smooth jazz. That was truer before than it is now as the Fourplay of 2012 bears little resemblance to the 1991 version despite three-quarters of the lineup being still composed of founders Bob James, Nathan East and Harvey Mason.

James' keyboards are still at the heart of the group, but whoever the guitarist is gives it much of its soul, and on Esprit De Four a lion's share of the direction as well. Loeb is predominantly featured on the first four tracks and guides the group into making music that is too passionate to be "slick." Even when East takes his standard vocal turn on "All I Wanna Do," Loeb's guitar is front and center leading the way.

This hardly means the rest of the band recedes into the background. Mason's "Venus" is lush and lovely with James and Loeb gently trading leads before smoothly dueting to the close. "Sonnymoon" is the closest these old pros come to sounding like "classic" Fourplay, as the Mason and East rhythm section keeps things fast and funky. It's just an excuse for four minutes of jamming, but let no one think Fourplay can't still get down when it wants to.

If Loeb steps up to assert himself as primary soloist, James, who will turn 73 in December 2012, seems willing to relinquish some of the spotlight to Loeb, or at least doesn't seem the least stressed out sharing it. James has a deep fondness for Eastern culture and his two contributions, "Sugoi" and "Put Our Hearts Together," are evidence of that influence. "Put Our Hearts Together" (in both an instrumental and vocal version) is dedicated to the people of Japan in the wake of 2011's horrific earthquake and tsunami. Esprit De Four eschews the Fourplay formula of American chart-topping guest vocalists such as Anita Baker or Michael McDonald in favor of a demonstration of cross-cultural outreach, as Japanese superstar Seiko Matsuda to provides the vocals for "Put Our Hearts Together."

The charge most frequently levied at Fourplay by its detractors is that the music is safe and formulaic. While it would be an untruth to say this is the most freewheeling quartet in jazz, it's petty to confuse popularity and acclaim with shallowness and superficiality. Fourplay cares too deeply about its music to be a cynical superstar band conceived as little more than a cash grab.