By EYAL HAREUVENI
July 8, 2014
Sign in to view read count 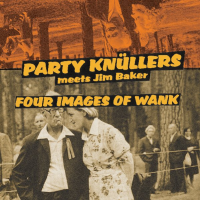 The duo Party Knüllers—Chicagoan cellist and electronics player Fred Lonberg-Holm and Norwegian drummer Ståle Liavik Solberg—wanted to intensify its already dense mix of sounds and added Lonberg-Holm's frequent comrade, synth player Jim Baker. The trio did a short tour in the United States before recording recording Four Images of Wank in the studio.

Apparently, according to the amused liner notes of Baker, presented as a letter from him to Lonberg-Holm and Solberg, Baker was not happy about the recorded outcome of this sonic match. He did not like the bilingual pun in the duo name, the pun-ish aspect of the album title, the grammar of the duo name with him but eventually agreed that recorded session was "encouraging, listenable."

But despite Baker's complaints he fits perfectly with the playful, eccentric spirit of Party Knüllers and expands its sonic mayhem with weird, otherworldly sounds produced from his vintage synth. The four free improvisations feature game-like explorations of sounds, shaping the new found sounds, make these sounds collide, explode in hope of finding new, exciting ones or at least an agreed dynamic that all three can tune in to, before all begin afresh.

Baker turns up the heat on the open-ended yet nuanced sonic journeys and his electronic sounds extend the manipulated cello sounds of Lonberg-Holm and the invented percussive techniques of Solberg. The improvisations are structured with a sense of tension, drama and dark humor, almost as cinematic images for a film made by some hyper-active species of aliens, using dissonant, noisy sounds as vocabulary of too enthusiastic courtship. Maybe Baker was right after all and Party Knüllers should have adopted his advise that "the music might arrive with fewer potentially self-disparaging description...."