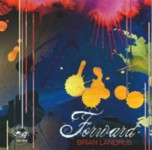 Forward, multi-instrumentalist Brian Landrus' first album, begins by looking back—with a version of Thelonious Monk's "Ask Me Now." This is, perhaps, a nod of recognition to past masters but Landrus' arrangement adds a freshness made even more effective by his use of the baritone sax as the lead instrument. The rest of the album, which was recorded in 2007, features Landrus' original compositions, with equally inventive arrangements, and makes it clear that he's a player to watch.

Landrus plays baritone sax, alto flute, and bass clarinet—an unusual and intriguing set of instruments that rarely take lead roles in contemporary jazz but which he plays with such warmth and precision that there is never cause to question their centrality across the album's nine tunes. The baritone is especially successful. On "Ask Me Now" it infuses the tune with a real richness of sound, creating a strong center around which Michael Cain weaves some delightful piano. On "The Stream," a more straight-ahead composition, Landrus' baritone duets beautifully with the tenor of George Garzone. "Interpretations" is a solo baritone piece on which the sax's tone is exceptionally warm, rich, and precise, investing the composition with a real humanity. One minor criticism—it's too short.

The alto flute and bass clarinet are featured on two tunes apiece and Landrus produces intriguing work with each of them. The clarinet on "Forward" is particularly effective during interplay with Allan Chase's alto sax and Jason Palmer's trumpet. "Destination" is credited jointly to its five players as an improvised piece. Landrus plays alto flute, while guest musicians Palmer and Chase join drummer Rakalam Bob Moses and percussionist Tupac Mantilla to complete the group. The two alto instruments trade some interesting phrases, but sadly they tend to be overwhelmed by the percussion, which is too high in the mix. However, this is a minor failing given the otherwise very high standard of production across the album.

Forward moves with confidence from free-form to bop to straight-ahead tunes. Landrus' playing and arranging skills are impressive and his core band members are tight and inventive. The album heralds the arrival of a strong new writing and performing talent.