Foreigner at the NYCB Theatre at Westbury 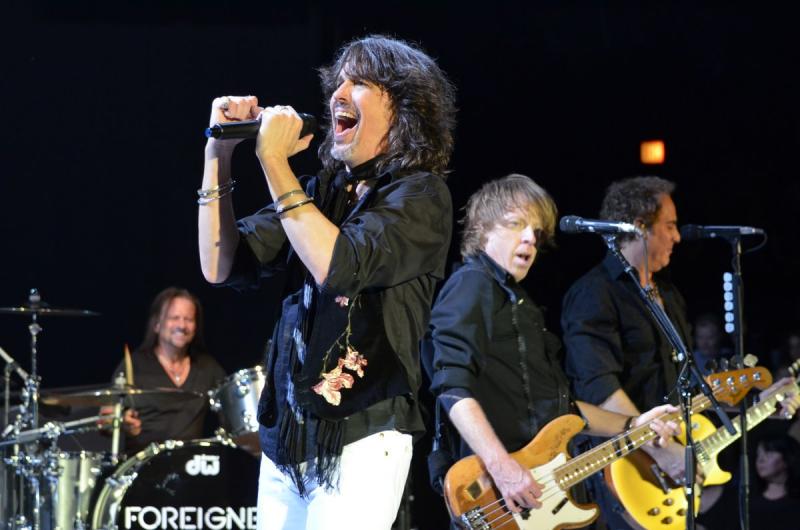 Foreigner was formed in 1976 by guitarist Mick Jones, multi-instrumentalist Ian McDonald, a former founding member of King Crimson, and vocalist Lou Gramm. Legend has it that Jones gave the band its name because he, McDonald and drummer Dennis Elliott were English, while Gramm, Al Greenwood (keyboards) and bassist Ed Gagliardi were from the States. The story goes that no matter what country the band would visit, at least three of its members would be foreigners.

The band's debut, Foreigner (Atlantic Records), was released in March 1977 and sold more than four million units in the United States. The album staying in the Top 20 for a year and spawned the hits "Feels Like The First Time," "Cold as Ice" and "Long, Long Way From Home." 1978 saw the release of Double Vision (Atlantic Records), which outsold the band's debut and featured "Hot Blooded," the title track and "Blue Morning, Blue Day." Head Games (Atlantic Records, 1979) included the thundering rocker "Dirty White Boy" and, of course, "Head Games." Following Head Games, the band parted ways with Gagliardi, Greenwood and McDonald.

Foreigner's next album, Foreigner 4 (Atlantic Records, 1981), contained the classics "Urgent" (with it blaring sax solo), "Waiting For A Girl Like You" and "Juke Box Hero." Thomas Dolby, who would go on to a very successful (to this day) solo career, played synthesizers on Foreigner 4, contributing the legendary keyboards on "Urgent" and the intro to "Waiting For A Girl Like You." Agent Provocateur (Atlantic Records), was released in 1984 and gave Foreigner its first and only #1 hit. The smash, "I Want To Know What Love Is," was a gospel-influenced ballad that featured backing vocals by Jennifer Holliday and the New Jersey Mass Choir. The album also featured "That Was Yesterday." In 1987 Foreigner released Inside Information (Atlantic Records), which contained the hits "Say You Will" and "I Don't Want to Live Without You."

In the late '80s, Jones and Gramm each put out solo recordings. In 1990, following the release of his second solo album, Gramm decided to leave the group. Jones decided to soldier on with Foreigner, bringing in a new lead vocalist, Johnny Edwards. This version of the band released Unusual Heat (Atlantic Records, 1991).

In April 1992, at the time of the Los Angeles riots, Jones and Gramm met and resurrected their partnership. Gramm rejoined the band, which released The Very Best...and Beyond (Atlantic Records, 1992), including three new songs. The group continued with Mr. Moonlight (Priority Records, 1995). In 1997, Gramm underwent surgery to remove a brain tumor. The medications he was prescribed affected his singing voice and he left the group in early 2003.

In July 2004, Jones debuted a brand new version of Foreigner that included Jeff Jacobs, Thom Gimbel, Jeff Pilson (formerly of Dokken), drummer Jason Bonham (son of Led Zeppelin drummer John Bonham) and singer Chaz West, who was soon replaced by Kelly Hansen. Eventually following a sort of revolving drummer's seat, the skins became the domain of Chris Frazier. Michael Bluestein took over on piano and keys. Guitarist Bruce Watson also joined. A new version of the band had been formed. Although discussions of an original member reunion have been proposed, the original band has not performed together since 1979, though Gramm and Elliott, as well as Rick Wills (who replaced Gagliardi), have joined the current band on occasion.

On this cool clear February evening, the current incarnation of Foreigner rolled into Westbury's NYCB Theatre for a sold out performance which was being recorded and broadcast live on YouTube. Following an announcement about a raffle for a signed guitar, the proceeds to benefit the Our Lady of Mercy school, the lights dimmed and the sound system at the intimate Westbury venue came alive with the classic sounds of Foreigner. As the quick montage of hits played, the band comprised appeared one-by one on the stage. First out were Bluestein on keyboards/piano and Frazier on drums. Pilson on bass, rhythm guitarist/keyboarist/saxophonist Gimbel and guitarist Watson appeared next. Frontman, Hansen was the last to reach the stage. Once he arrived, the group opened its set with the one-two punch of "Double Vision" and "Head Games." "Cold As Ice" followed during which Hansen jumped into the crowd and walked his way across through a number of sections of the venue (using the audience members as crutches and bridges when the aisles impeded his progress) before returning to the stage.

A ballad, "Waiting For A Girl Like You," was next. Hansen then took a moment to introduce Foreigner's founder Mick Jones. Hansen stated that it was a special evening and that "we're going to make it a little more special." Jones he said, was a recently inducted into the Songwriter's Hall Of Fame and "was a bad-ass lead guitarist. Let's make some noise for our leader, Mr. Mick Jones!" Jones—who, in the early part of 2014, was not performing with the band due to health issues, looked healthy and fit as he sauntered onto the stage with his guitar slung over his shoulder. The founding guitarist performed with the band for the rest of the evening.

"Feels Like the First Time," a driving version "Dirty White Boy" featuring a light show with strobe lights that could quite possibly trigger an epileptic seizure, "Say You Will," and a saxophone-driven (of course) version of "Urgent," during which Hansen commandeered a stool, placed it on an amp at the very front of the stage and sang, followed. A tour-de-force performance of the mega-hit "Juke Box Hero," featuring a keyboard solo and a drum solo that had to be seen to be believed, as Frazier pounded the water covered tom toms, showering the stage with an amazing rain storm, closed out the main set.

Leaving the stage for a short moment, Hansen came out with the band for the encores. "Long, Long Way From Home," Jones announced, was a song about how the band got together. He punctuated his statement with the comment, "Side 1, song 3; multiple saxophones on this song!"

When the song ended, Hansen came forward and said, "I need to ask if you can sing along with us. You know the words..." The band then began playing "I Want To Know What Love Is." It was at this point that the select choir from Our Lady of Mercy Academy in Syosset, NY joined the band on stage and sang its heart out. The all-girl, high school choir, delivered a letter perfect rendition of the song, a performance that was so pitch perfect and sublime that the band members took the opportunity to hug and shake hands with each and every member of the choir.

During the driving version of "Hot Blooded," the already on-its-feet crowd fist-pumped and screamed the lyrics at the top of its lungs. Hanson grabbed the camera from one of the YouTube cameramen and panned the stage, the audience, the individual members of the band all the while delivering a spot-on rendition of the song. When the song ended, the band members joined hands, stepped to the front of the stage, raised their arms and thanked the audience in the venue and those who watched on YouTube. The standing ovation was ear-splitting.

Though, this reinvented version of Foreigner, had Jones' DNA all over it, it would not have succeeded had the players not been top-notch performers in their own right. As the crowd filed out it was obvious that few knew, or cared, who was in the current band; they all had a fantastic time.