By DAN BILAWSKY
November 27, 2015
Sign in to view read count 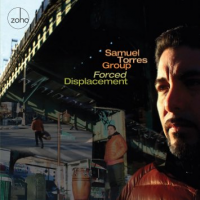 When Chamber Music America awarded Colombian-born, New York-based percussionist Samuel Torres a New Jazz Works grant in 2012, the wheels started spinning in his mind. Ultimately, it would be his native land that would help determine the directional vision for the grant-funded work: Torres, inspired by a visit to San Juan de Urabá and an encounter with Afro-Colombian folkloric master Emilsen Pacheco, settled on the idea of a suite to shed light on those who've been most affected by the violence in his strife-torn homeland. And so began the story of Forced Displacement.

Fast forward three years, and now you have the on-record arrival of the ambitious Forced Displacement Suite—a ten-part work that's fraught with danger, filled with heartache, and lined with beauty. It's a percussive feast with conflicting emotional angles, juxtaposing joy against despondency, strength against vulnerability, and darkness against light. Those terms of tension and conflict are at the heart of the suite, helping Torres to fully express himself and deal with the issue(s) at hand.

This work is influenced by a variety of forms and styles—jazz, classical, the Colombian-by-way-of-Africa bullerengue—and synthesized by a stellar octet: Torres, percussionist Jonathan Gomez, and drummer Obed Calvaire control the rhythmic flow; the three horn front line of trumpeter Michael Rodriguez, saxophonist Yosvany Terry, and trombonist Marshall Gilkes works above ground, painting with a sense of purpose and pride; and bassist Ricky Rodriguez and pianist Luis Perdomo bridge the gap, acting as representatives in both camps.

The music presented here can be purely mournful at times ("Overture"), but Torres isn't interested in painting a one-dimensional, depressed picture. Quite the contrary, in fact. Uncontainable enthusiasm wins out in several places ("Las Canta'oras," "Narrador De Espejismos"), drums of passion pave the way ("Velada De Tambores"), and nature melds with the human spirit in sound ("Lluvia, Luna Y Voz"). Cohesive group work helps to drive the message forward and the individuals involved with this project have plenty of opportunities to express themselves. All three horns, for example, let loose one after the other ("Las Cant'oras"), and Torres shines while delivering a five minute masterclass on the art of conga drumming ("Finale"). But Forced Displacement shouldn't be simply defined or judged by some tightly arranged sections of music, instrumental breaks, and virtuoso displays. Those elements are all in place, but this album is greater than the sum of those parts. This is music for social justice, built to inform, inspire, enrage, and explore. When viewed on those terms, it rates quite high.