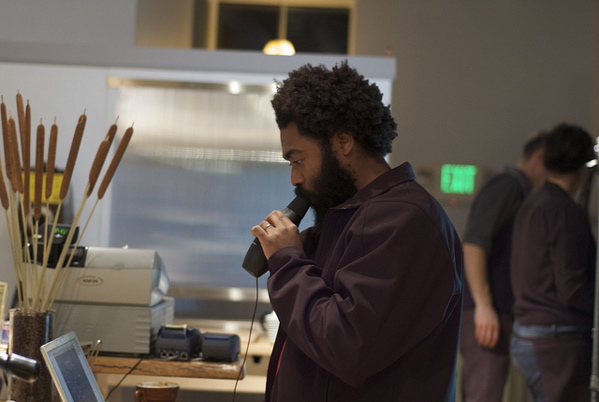 The sound of a bubbling stream seeped out of Forbes Graham's computer as he performed his sound check. In attendance was a small but dedicated crowd of admirers. With intense eyes and a mysterious smile, Graham brings electricity to a room, giving it a glow even when the lights are dimmed, as they were when the performance began in proper, the stream rising again and mounting into warring, watery chords.

Forbes Graham is Boston's newest trumpet sensation, second only to Greg Kelley as an innovator of national proportions. Kelley is the great originator of a now-burgeoning, abstract, against-the-grain style of playing that has already situated a place for him in improvised music history: but Graham is fast catching up with him, in his own manner; a manner more sympathetic to the jazz tradition, to its blues roots and even, to be quite sure, its now somewhat atavistic aim to entertain—something Kelley eschews.

It can be good to underline differences that distinguish niceties of style and aim. Or, more importantly, serve as a way of championing both of two parties. Such dichotomies are common in sports, in baseball of the 1950s and '60s for example when fans debated the relative merits of Mickey Mantle and Willie Mays—or in music itself, where jazz trumpeters Freddie Hubbard and Lee Morgan shared a scene, and hence were compared. The fact is, both trumpeters, like both the baseball sluggers, made a historical mark. So will Graham and Kelley.

No more than poetry is Graham's music about competition. It is about communion. As such, it brought the gathered audience last night together in reverie, meditation and dream. The best music will as soon at times let the attention drift, as into sleep, before it bounces back to the room and realizes what had lulled it away. The watery chords...

Graham's principle instrument was wired, or electronically interfaced, with the computer. He worked it into the cybernetic flow. Soon, staccato trumpet ticks gathered like raindrops in an oncoming storm, and then a string of zaps like a rhythmic electrical current. Static and seeming to go nowhere, then tugging like the next guy in a chain gang, this was music about ratios and relations, oscillating between discipline and pleasure; culminating in a conglomeration of chords bordering on the psychedelic, abutting and jutting up against each other like tectonic plates through which a new slew of distorted trumpet notes was injected like a booster shot. 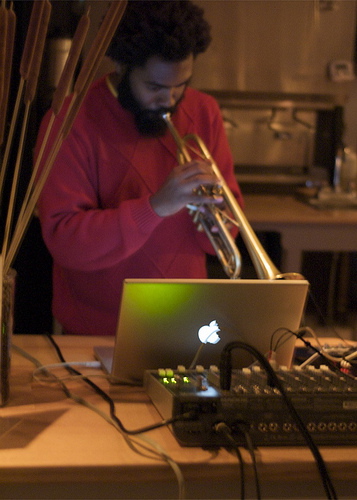 Sometimes the pace was so glacial and measured it sucked the mind into a morass; then alternately Graham would impose a hectic tempo that drew it right into the immediate proceedings, putting it in a surrealistic picture frame. He has a gift for balancing wild abandon with stern focus and plain hard work: he is not afraid to make his listeners work, and then hit the reward center with delectably decadent treats.

An artist has to reckon with a plethora of dualisms in his/her work—binary oppositions: emotion/thought, concept/technique, microcosm/macrocosm, form/idea, seed/tree, theory/practice, vision/realization—the list goes on. As often as not, each will choose one pole and explore or exploit it to its limit. If they take it far enough, as Graham does, they reach a new dimension, or a new plane. Shattering a smaller whole they re-arrive at a greater whole, which is—not necessarily more cohesive; but on the contrary more internally combative and afire with scintillation and sparks. As Graham unraveled his coils of sonic theory, themes reared up, then became submerged in a kind of Lethe wind, appearing lost for good; but came back to condition, from the beyond, an entirely new configuration of aesthetic elements.

His work involved letting warring parts stay at war as opposed to reconciling them into a mild and anodyne stasis: psychomachia—though at times, it could completely rebuff thought and force it into the physical. After one spacey computer sequence a jarring treble note drew all eyes back on him again too see him with trumpet in mouth, with only the slightest semblance of a brass tone to alert the ear to the fact that it is indeed a real, acoustic instrument at the base of the sounds' creation.

The processed trumpet at two points during the evening lifted the room with electro-funk. Graham never neglects to do such things in his shows, stick in at least one soul note or blue note, a shot of swing or down-home funk. That said, again he is cerebral as they come, with mathematical and numerological bases to what he executes. Graham was a wizard, orchestrating the astrological emanations of planets for the benefit—or curse (who really knows his secrets...) of the night's elect.