Steven Lugerner: For We Have Heard

By GLENN ASTARITA
August 28, 2013
Sign in to view read count 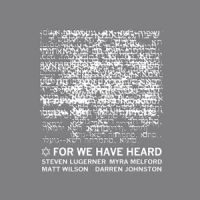 Multi-woodwind expert Steve Lugerner's solo outing for this Lithuania-based progressive/avant-jazz record label enters the market as a limited edition of only 500 LPs. Get them while they last, as some would say. And it's a very distinctive performance, duly capturing the earthy attributes of this all-star lineup's contrasting song forms and extraordinary synergy, clocking in at 32 minutes and recorded with analog equipment.

Drummer Matt Wilson establishes a march-like progression during the album opener, "Us and Our Fathers." Here, trumpeter Darren Johnston escalates the proceedings with his resonating notes to spark a tightly knit vibe that projects clarity of execution amid playful passages within a regimented flow. Wilson kicks it into overdrive with a poetic, medium-tempo solo that restructures the primary melody. With chamber-like moments or offbeat tonal swashes, the program's variable outline skirts avant metrics, spanning austerity and introspection, along with Lugerner's manifold phrasings, executed on an arsenal of woodwinds.

Pianist Myra Melford ignites a delicate ballad on "For We Have Heard," as Johnston's extended notes and animated runs paint a broad backdrop for Lugerner's meticulously rendered lines, often casting a sense of isolation. The band revisits a less-pronounced march motif on "All Those Kings," featuring Lugerner's soulful alto sax choruses and counterbalancing output with Johnston as they engage in a moderately heated dialogue. Meanwhile, Melford constructs a rumbling undertow as the musicians navigate off-course, rendering linear unison lines and odd-metered time signatures. They uncannily articulate a malleable soundscape that proposes an additional source of interest.

Indeed, Lugerner is a wise soul who possesses a deep-rooted artistic persona via his markedly unique compositional style, paralleling his astute leadership.

Us and Our Fathers; When a Long Blast is Sounded; Drove Out Before Us; Be Strong and Resolute; Before Our Very Eyes; Through Whose Midst We Passed; For We Have Heard; Up From The Land; All Those Kings; Our Children in Time