By KARL ACKERMANN
April 6, 2016
Sign in to view read count 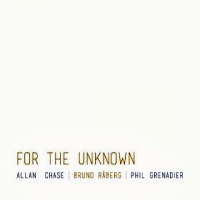 Three-quarters of bassist Bruno Råberg's Hot Box (Orbis Music, 2015) quartet, reunites on an unusual trio recording, For The Unknown. Among the unusual aspects of the album are Råberg, trumpeter Phil Grenadier and saxophonist Allan Chase turning out nineteen free improvisations in just over forty-five minutes, eight of the pieces clocking in at less than two minutes each.

Råberg, Grenadier and Chase have been recording together since the bassist's nonet recording Chrysalis (Orbis, 2004) and for the most part, improvisation has been a core creative principle in their music. In the more intimate setting of Grenadier and Råberg's duo album Plunge (Orbis, 2012), the bass and trumpet had many opportunities to shine, but the technique of recording an initial improvisation, and then adding accompaniment, blurred the solo concept to some extent. On For The Unknown, almost half of the tracks are solo improvisations and though some have been subjected to electronic manipulation, we get a purer sense of the musicians in a vacuum.

For The Unknown should initially be taken as a whole for maximum effect as there is a narrative quality in the way these pieces line up. Beyond that context, it is some of the solo tracks that have the greatest impact, as this is where the individual players wear their creativity on their sleeves. Grenadier's two solo contributions include "Tincture Bell Part I" which opens in a beautifully played and haunting gospel mode. Råberg's emotive "Sculpture VI" and Chase's ethereal "Peace Agreement" are other solo highlights but there is much more to uncover in the mixed duo and trio formations. The very complex "Time Painting Backwards" and the simpler and moody, "Miro's February" are a good example of the range of emotions the trio encompasses.

There's much to like in this trio that treats improvisation like artisans rather than anarchists. The past may paint these musicians as being aggressively experimental and while those sensibilities are not lost here, the music on For The Unknown is also refined and passionate. Traditionalists and pioneers will similarly find much to like in this collection. The music remains imaginative and personal without avoiding the thorny aberrations that make it stand out in its inventiveness.