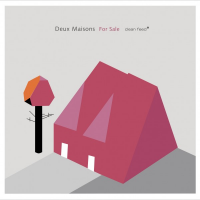 The two houses name-checked in the outift's moniker refer to the twin countries represented by the string pairing of French brothers Théo and Valentin Ceccaldi and the Portuguese duo of trumpeter Luis Vicente and drummer Marco Franco. Vicente already boasts a well received previous disc in Clocks & Clouds (FMR, 2014) which matched both him and Franco with two thirds of the RED Trio, namely fellow countrymen pianist Ricardo Pinheiro and bassist Hernani Faustino. This release with its idiosyncratic group conception and unusual instrumentation might prove similarly popular.

While there are no real tunes or themes, the juxtaposition of melodic fragments, alongside the more abrasive elements especially from the strings, leads to an unassuming lyricism which permeates the date. In dense four way soundscapes, folk derived airs vie with jazz, contemporary classical and improv, but the resultant mix doesn't properly reside any genre. The collective eschews solos and seem to avoid any displays of ostentatious technique, yet each unlikely component interlocks with its fellows to create a whole which convinces and fuels emotional ambiguity and intrigue.

Although divided into six tracks, the album presents as one overarching piece. On drums Franco clatters effectively while sounding unlike any other proponent of jazz drumming. He manufactures a lurching momentum rather than countable rhythm. The prime example comes on the opener, "Two Balconies," where the rattle coheres into a shuffling boogaloo, while layers of strings and trumpet manufacture a sense of wistful longing. In fact trumpeter Vicente threads potent yet understated fanfares throughout the program in a bitter sweet vocalized tone.

On violin and cello, the Ceccaldi siblings, both former students of bass virtuoso Joëlle Léandre, waver and meander in wiry asceticism, which culminates on "Two Living Rooms" in an energetic interweaving of expressive muted trumpet and nimble sawing. In its overlapping phrases the closing "Two Kitchens" demonstrates how the elements fits together. Amid the polyphony, a repeated cello motif morphs almost, but not quite, into a riff while the violin soars, before a spare trumpet and drum duet takes center stage. Finally all four unite in a smoldering interplay of throbbing cello, pizzicato violin, tapping drums and smeary trumpet splatters. Not bad for the agglomeration's debut.