Ben Paterson: For Once in My Life

By JACK BOWERS
September 23, 2015
Sign in to view read count 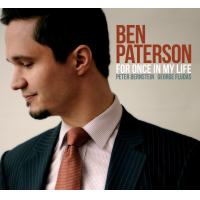 For Once in My Life is Ben Paterson's fourth album as a leader but first as an organist. In his native Philadelphia—home to such giants of the Hammond as Jimmy Smith, Shirley Scott, Charles Earland and Joey DeFrancesco—Paterson was known as a pianist. He began doubling on organ while living in Chicago, and by the time he moved to New York City in 2013 was gigging regularly on organ and piano all over Manhattan, from Harlem in the north to Greenwich Village in the south. One of the reasons he made the move to organ, Paterson says, is "I get to be the bassist."

That he does. On the other hand, that doesn't mean Paterson is shy of any rhythmic support on this agreeable session, as his teammates in the trio are the splendid guitarist Peter Bernstein and drummer George Fludas, long a mainstay on the Chicago scene and someone who keeps unerring time while giving Paterson and Bernstein ample space in which to flex their creative muscles. As an organist (as he was as a pianist), Paterson eschews flash for substance, preferring for the most part to let the music speak for itself. Even though the technique is sound, there is little in the way of bombast or running the scales for swaggering's sake. Instead, Paterson shapes his solos with care, using a nimble right hand to underscore his purpose while adding expansive chords when needed.

Fludas has the first word on Ray Bryant's rhythmic "Cubano Chant," the opening theme in a program that encompasses five standards, original compositions by Paul Simon ("50 Ways to Leave Your Lover"), Sonny Rollins ("Decision") and Horace Silver ("Nutville"), and Paterson's "Blues for C.F." and "Near Miss." Besides the title selection, the standards are Billy Reid's "I'll Close My Eyes," Arthur Hamilton's "Cry Me a River," Carl Fischer / Frankie Laine's "We'll Be Together Again" and Frank Loesser's "I've Never Been in Love Before." The trio plays each one close to the vest, drawing out the harmonious assets before plumbing its more innovative depths.

Paterson imparts the melody on every number save "We'll Be Together Again," a showcase for Bernstein's burnished guitar. While he and Paterson are front and center most often, Fludas makes the most of the occasional chance to unveil his chops. The three work well as a team, and For Once in My Life marks an impressive debut for "organist" Ben Paterson.

Cubano Chant; I’ll Close My Eyes; 50 Ways to Leave Your Lover; Cry Me a River; For Once in My Life; Decision; Nutville; Blues for C.F.; Near Miss; We’ll Be Together Again; I’ve Never Been in Love Before.

Title: For Once in My Life | Year Released: 2015 | Record Label: Origin Records