By GLENN ASTARITA
October 6, 2016
Sign in to view read count 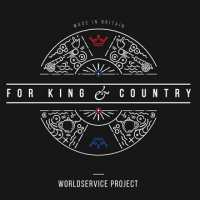 This UK-based ensemble led by keyboardist, composer Dave Morecroft parallel what the rebellious Rock-In-Opposition (Henry Cow, Present, Art Zoyd) movement may stand for via a jazz-centric perspective; although, WorldService Project does not seem to be launching a tirade against conventional wisdom or record labels for that matter. But references to Punk-Jazz, or Nu-jazz may be somewhat in order on the band's debut release for the always enterprising Rare Noise record label. Thus, Morecroft and associates merge fire and ice with odd-metered and painstakingly precise arrangements to complement their rebel-rousing mode of operations.

The ensemble's blaring horns and nanosecond shifts in strategy kept me on the edge, in a good way that is. With memorable hooks, jazzy Irish jigs and anthem-like vocal choruses on "Flick the Beanstalk" that summon notions of gearing up for a World Cup soccer match, the musicians' abide by a non-conforming but easily attainable methodology. They coalesce foot- stomping metal jazz with slamming backbeats and hard bop choruses amid pleasantly in-your-face overtures along with funk and sojourns into avant-garde vistas.

"Murano Faro" is an exception to the rule so to speak. Here, they generate a budding and ethereal soundscape that sounds like a snippet from a cinematic score. And the following piece "Son of Haugesund," offers doomsday interludes and weighty grooves. Other works like the Zappa-esque "Go Down Ho' ses" is built on a sliding horns-framed reverse-engineering motif, contrasted by trombonist Raphael Clarkson and saxophonist Tim Ower's good-timey parts, leading to a maniacal super- speed theme, as they seemingly race against time.

This veritably exciting quintet also conveys an uncanny ability to shape its musical aura via big band type charts and just about anything else imaginable. However, the differentiator is steeped in the artists' unfathomable ability to stitch these disparate ideas into a cohesive whole while not solely focused on dishing out one technical feat after another. It's For King & Country and everyone else who is willing to explore new musical frontiers and engage in a little revelry along the way.